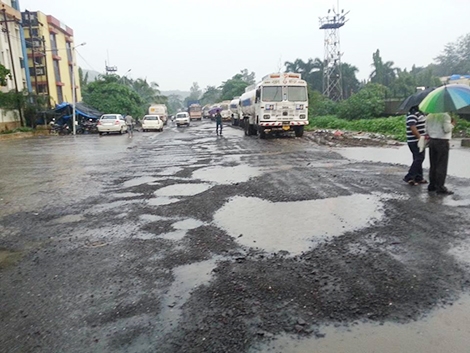 Adivashi has been reporting how precious drinking water is being wasted for washing vehicles, gardening and even washing of walls and front yards of housing colonies in this so-called modern city. NMMC has of late launched a project to supply treated sewer water for gardening on an experimental basis for Seawoods housing complex at a concessional rate. Now comes the news that the right hand of NMMC does not know what the left hand does at least as far as rainwater harvesting is concerned. Properties constructed after 2008 ought to have rainwater harvesting system, apart from tree plantation in the compound. But the ward officials do not seem to be aware on monitoring the facility and the town planning department says it is mandatory to check it before issuing occupancy certificates (OCs). NMMC has given over 800 OCs over the past six years and today no one is sure as to how many buildings have rainwater harvesting installed. It is a simple system wherein the rail water is channel into an underground tank and the excess water is allowed to seep into the ground. This helps recharge the ground water table. Simple, isn’t it? But for our civic officials it appears to be rocket science. Though it is mandatory as per the development control regulations -1994, the civic officials do not seem to have adopted any system to check the implementation. The result is thousands of litres of water just flows away into the creek. One wonders as to what the social organizations, clubs and elected representatives are doing about creating awareness. Like Mark Twain said about weather, everyone talks about rainwater harvesting but no one does anything about it. It is time NMMC puts up this piece of information too on its website as they name and shame illegal constructions.

While on the monsoon, the interior roads in Thane-Belapur MIDC belt have become infamous over the years for water logging and potholes. And office-goers and visitors to various auto showrooms and service centres seem to have got used to wading through the rain waters and dirty water overflowing from public toilets. Adivashi took a ride on Sunday on the newly expanded Sion-Panvel highway only to be shocked at the state of affairs. One had to literally ride over stones on the flyover at Shiravane as the road got washed away in the heavy downpour. The car tyre developed a two-inch wide cut and it had to be discarded. Traffic invariably slows down as one approaches the flyover, defeating the purpose of the expansion that was done at cost of crores of rupees of taxpayers’ money to speed up the traffic. One hopes that the Chief Secretary committee that is looking into the opposition of toll tax for this road considers this aspect. Meanwhile, the toll plaza at Kharghar is ready for operation. The contractor consortium is waiting for the government’s green signal to start collection.

The highway poses another hazard as it is yet to be illuminated. The lamp posts uprooted for the expansion are yet to be reinstalled. The dark nights, particularly during heavy downpour, pose dangers of accidents as people live on both the sides of the highway and keep crossing the road. Not that the officials do not know this, but who cares? Police say there has been a 35% rise in the number of road accidents in the city.

Adivashi has been reporting about lack of civic sense in the city as garbage piles up and spreads at various places, including near posh malls. Now we are told that signal jumping at road junctions has become a big menace. One often notices motorists jumping signals at Vashi’s highway, Shivaji Chowk and near hotel Blue Diamond junctions. Motorists look for lurking traffic police around and they just zoom through the red signal if they do not notice any men in uniform. Motorists blatantly violate zebra crossings and block pedestrian movement – particularly at Shivaji Chowk. A piece of statistics is that the city recorded 13,244 cases of signal jumping in the first half of this year – 522 more than the last year’s January-June period.  Well, aren’t the city police tracking such violators through the CCTV camera and sending notices to errant people?

Amid this gloom, here is a ray of hope for better living in the city. The Vashi police has taken an initiative to have drop boxes at various schools and colleges to facilitate students and teachers lodge complaints. Police have noticed that girl students often are hesitant to complain about sexual harassment. As new academic year began, one could also hear cases of ragging. Senior police inspector Ram Pathare hopes that the drop boxes will help alert the police and take timely action. Indeed a good move that should be emulated at all nodes of the city.

What happens if you don’t pay your electricity bill? Your power connection is cut. This is what happened at Kharghar skywalk last week as the place plunged into dark as CIDCO did not seem to have paid the power bill. Frantic phone calls from CIDCO officials to DISCOM ensured that power connection in a couple of hours!

This is the 83rd in a series on Navi Mumbai by veteran media professional B N Kumar, a long time resident of Mumbai’s twin city. He can be contacted at: mailbnk@gmail.com