Malfunctioning bio-toilets and LCD screens, and water leakage in coaches are some of the issues red-flagged by the IRCTC since July in its letters to the Railway Board and the Western Railways

Mumbai: The Indian Railway Catering and Tourism Corporation (IRCTC) has demanded rakes similar to those of Vande Bharat which will run between Mumbai and Gandhinagar, for Mumbai-Ahmedabad Tejas Express.

Highlighting the poor condition of the rakes, the IRCTC has written to the Railways to allocate a Vande Bharat rake for the train.

"One of the Vande Bharat rakes be allocated for the Mumbai Ahmedabad Tejas Express with a composition of 16 coaches," stated the IRCTC letter addressed to the Railway Board and the Western Railways. 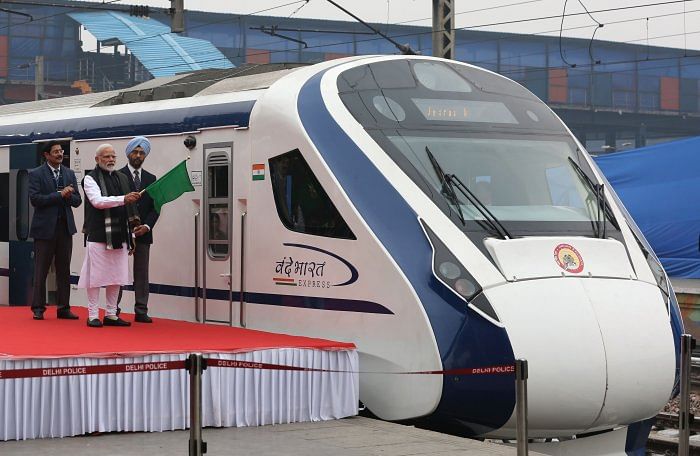 Malfunctioning bio-toilets and LCD screens, and water leakage in coaches are some of the issues red-flagged by the IRCTC since July in its letters to the Railway Board and the Western Railways, the zone in which the train runs, urging them to help fix the same.

"This will not only put an end to passenger complaints about deficiencies being received especially during the monsoon, rather it shall also solve the woes of the mechanical department both in maintenance as well as flexibility in spares management," it added.

A rake is a line of coupled passenger coaches or freight wagons or railcars (excluding the locomotive) that typically move together.

The letters also stated that the train was being maintained on an "ad hoc basis in a piecemeal way" which is not befitting the premium train service.

"Coaches are in a deteriorated condition due to non-maintenance, thereby tarnishing the image of brand Tejas and giving rise to complaints from passengers," another letter read.

In the latest letter earlier this month, the IRCTC has raised the issue of no support for the maintenance of high-end equipment on board by the original equipment manufacturers (OEM) after the expiry of the annual maintenance contract (AMC).

It said the IRCTC was running the train despite the "substandard rakes and maintenance issues".

"Even the rake allotted is reportedly a pilot manufacture of Tejas rake by RCF (Railway Coach Factory) which was not very successful; all subsequent Tejas rakes running now have been manufactured at MCF (Modern Coach Factory). There is no OEM support," the letter added.