BJP MLA Ms Manisha Chaudhari took strong objection to Mr Bhujbal’s statement who was speaking in a discussion over the supplementary demands in the state assembly.

Maharashtra: Clamour in state assembly over Bhujbal’s 'Mumbai is a hen laying golden eggs' statement | PTI
Follow us on

BJP MLA Ms Manisha Chaudhari took strong objection to Mr Bhujbal’s statement who was speaking in a discussion over the supplementary demands in the state assembly. She claimed that it was an insult to the city which is India’s financial and commercial capital. She demanded that Mr Bhujbal’s sentence should be excluded from the proceedings. Yogesh Sagar: Is there a monopoly on insults?

Ms Chaudhari was also agitated over Mr Bhujbal asking her to sit down when he was speaking. She was supported by the BJP legislators in the state assembly.

'You will insult Saraswati, Savarkar and saints. Is there a monopoly on insults? Mumbai made you mayor, MLA, got recognition, you talk about Mumbai like that. This is an insult not only to Manisha Chaudhary but to women, so Bhujbal should apologise,' said BJP MLA Mr Yogesh Sagar.

Mr Bhujbal tried in vain to argue his case but BJP members were not prepared to listen to him.

Mr Pawar intervened and said, ‘’Mumbai belongs to everyone, no one can make such a statement about Mumbai.’’ Despite his statement the BJP members were quite agitated. Finally, Mr Pawar apologised.

He however, argued that, ‘’We decided to give 33 per cent reservation to women, we took this reservation to 50 per cent. Our stand is that women should be treated with respect. But I apologize if someone's sentiments were hurt.’’

Mr Bhujbal explained his state and said, ‘’Discussion on supplementary demands had started and in which Rs 9,000 crore have been earmarked for Mumbai. I was arguing that the basic facilities should be done properly. Even after 6 months, there is no trace of anything. Mumbai's air quality index crossed 330.  Pollution should be reduced. Mumbai is the proverbial hen that lays the golden egg. The women MLAs objected and argued, after which I retracted the words.’’ He claimed that the ruling side was not keen for the smooth functioning of the house. 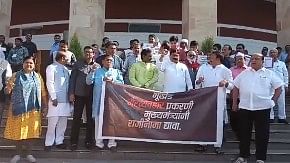 Mumbai: Traffic in Worli to be affected due to work on Love Grove flyover