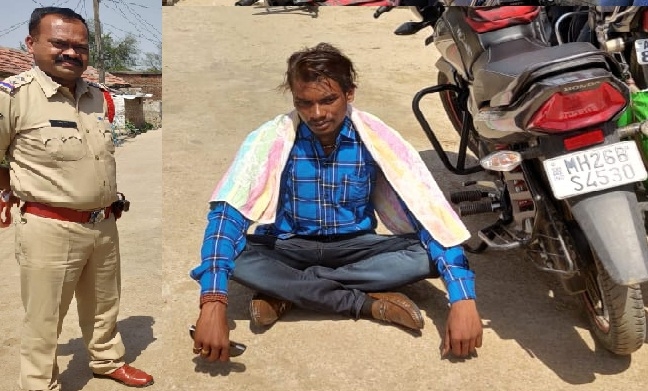 Mumbai: After the murders of a religious leader and his disciple late on Saturday in Nanded district, Chief Minister Uddhav Thackeray and Home Minister Anil Deshmukh took serious note and instructed police to arrest the accused. Within a few hours, the killer was caught. Superintendent of Police of Nanded district Vijaya Magar, Additional SP Vijay Pawar and senior police officers reached the scene of the crime. Teams fanned out to track down the accused. After Maharashtra Police alerted their Telangana counterparts, the latter nabbed the accused on his two-wheeler the following afternoon and handed him over to Nanded Police at 3pm on Sunday.

There appears to be no religious motive behind the murder, just as in the April 16 incident at Palghar, where two sadhus and the driver of the car they were travelling in, were killed after being mistaken for thieves by a mob. In Nanded, the motive for the double murder appears to be robbery.

Nirwan Rudra Pashupatinath Maharaj was killed at his mutt in Nagathana village, Umari tehsil, by Sainath Lingade around 2am on Saturday. The guru, also known as 'Baltapasvi', was an important religious leader of the Lingayats. The accused too is a Lingayat.

At the time of the incident, many of his disciples were sleeping on terrace of the mutt. Lingade entered the mutt around 1.30am and first killed Bhagwan Shinde, a disciple and dumped his body in the bathroom. Then he entered the room where Pashupatinath Maharaj was sleeping and strangled him to death. He robbed the cash and gold in his room, dragged Maharaj’s body to his car and tried to flee. But as he was trying to do so, his car struck the gate. The loud noise alerted the villagers and disciples sleeping on terrace. Panicking, the accused fled on his two-wheeler.

When the villagers learnt of the murders of two people, they began an agitation. Shiva, a Lingayat community organisation announced that they would not take possession of the bodies until the accused was arrested. They claimed it was the neglect of the police department that resulted in the murders.

The accused, Lingade, was already on bail in another murder case. He would roam around the village brandishing an axe and threatened to murder whoever he met. The villagers and their sarpanch had complained about him to Umari police station. “He is mentally disturbed. But instead of cancelling his bail or arresting him, police let him out with just a warning,” villagers told local media.

“Two sadhus were killed in Palghar and now, another in Nanded. With this, a message has gone that religious figures are not safe in Maharashtra. Had police acted on the villagers' complaints, this incident would not have occurred. This is shocking and CM Thackeray should personally look into it and ensure the accused will be punished,” BJP state president Chandrakant Patil said.

“Nirwan Rudra Maharaj was a much-respected religious personality in that area. He had also started food centre (Annachhatra) for the needy,” he added.