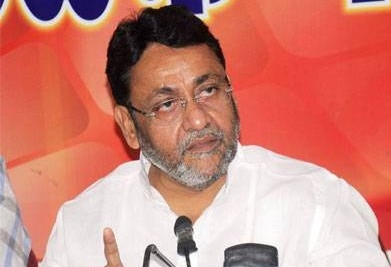 Mumbai: NCP leader Nawab Malik on Sunday hinted at lending support to Sena in Maharashtra saying, "it is up to the Shiv Sena to decide whether it wishes to do politics with respect or wants to face insult as it did in the past five years".

"We will clear our stand after Shiv Sena will initiate talks on a coalition with the NCP. So far, no discussion has taken place between the two parties. We are presently behaving as the opposition only. But if Shiv Sena changes its course, then-new political equations can come into play," he added.

He also accused the BJP of using muscle power to bag votes in the recently concluded Maharashtra Assembly polls.

"BJP used gangsters in the elections to get votes. The party is misusing its power." The current term of Maharashtra government ends on November 8. State Minister Sudhir Mungantiwar had earlier said the state might head for the President's rule if the government is not formed before November 7.

The BJP emerged as the single largest party by winning 105 seats while the Sena emerged victorious on 56 seats in the 288-member Maharashtra Assembly.