In the letter sent to Om Birla, Navneet Rana alleged that she was denied access to drinking water and not allowed to use the washroom.

Amravati MP Navneet Rana on Monday wrote a letter to Lok Sabha Speaker Om Birla and said that she was ill-treated in the lock-up at the Khar Police Station.

In the letter sent to Om Birla, Navneet Rana alleged that she was denied access to drinking water and not allowed to use the washroom.

"To my shock and disbelief, the police staff present told me that I belong to Scheduled Caste & hence they will not give me water in the same glass. Thus, I was directly abused on the basis of my caste and it is only for this reason that no drinking water was provided. I emphatically state that basic human rights such as drinking water was denied to me on the ground that I belong to Scheduled Caste. Further, when I wanted to use the bathroom at the night, police staff paid no heed to my demands. I was again abused in the most filthy language...I was told that we don’t let people from Scheduled Castes use our bathrooms," she said.

She lashed out at the Uddhav Thackeray government over the Hanuman Chalisa row. Accusing the Shiv Sena of giving up its ‘avowed’ Hindutva principles for power, Rana in her letter to Lok Sabha speaker Om Birla said: "It's my honest & bona fide belief that Shiv Sena under Uddhav Thackeray completely strayed from its avowed Hindutva principles for obvious reasons since it wanted to betray public mandate&form post-poll alliance with INC-NCP."

“I, with the sincere hope to rekindle the flame of Hindutva in Shiv Sena had declared that I shall go to the residence of the Chief Minister and chant the “Hanuman Chalisa” outside his residence. This was not meant to incite any religious tensions," she wrote in the letter.

"In fact, I had invited the Chief Minister to join me in chanting the “Hanuman Chalisa”. I reiterate that my actions were not against the Chief Minister. However, looking to the fact that my actions may prove detrimental to law & order situation in Mumbai, I had publicly withdrawn from the said exercise & declared that I shall not be going to CM residence. I was confined with my husband Ravi Rana, an MLA, in my house," she added.

"A case is registered at Khar Police against MLA Shri Ravi Rana and MP Smt Navneet Kaur Rana under sections 153(A), 34, IPC r/w 37(1) 135 Bombay police act," stated an official release by the police.

On Sunday they were sent to judicial custody for 14-days by a Metropolitan Magistrate court in Bandra.

On Saturday, a row started when MP Navneet Rana and her husband stated that the couple plans to chant Hanuman Chalisa outside 'Matoshree' (Maharashtra CM's Mumbai Residence), after which a huge crowd gathered outside the residence of the political couple waving flags with an aim to prevent them from reaching the Chief Minister's residence.

The Ranas withdrew their plan to chant Hanuman Chalisa amid the protests from Shiv Sainiks that culminated in their arrest on the charge of creating enmity between different groups. 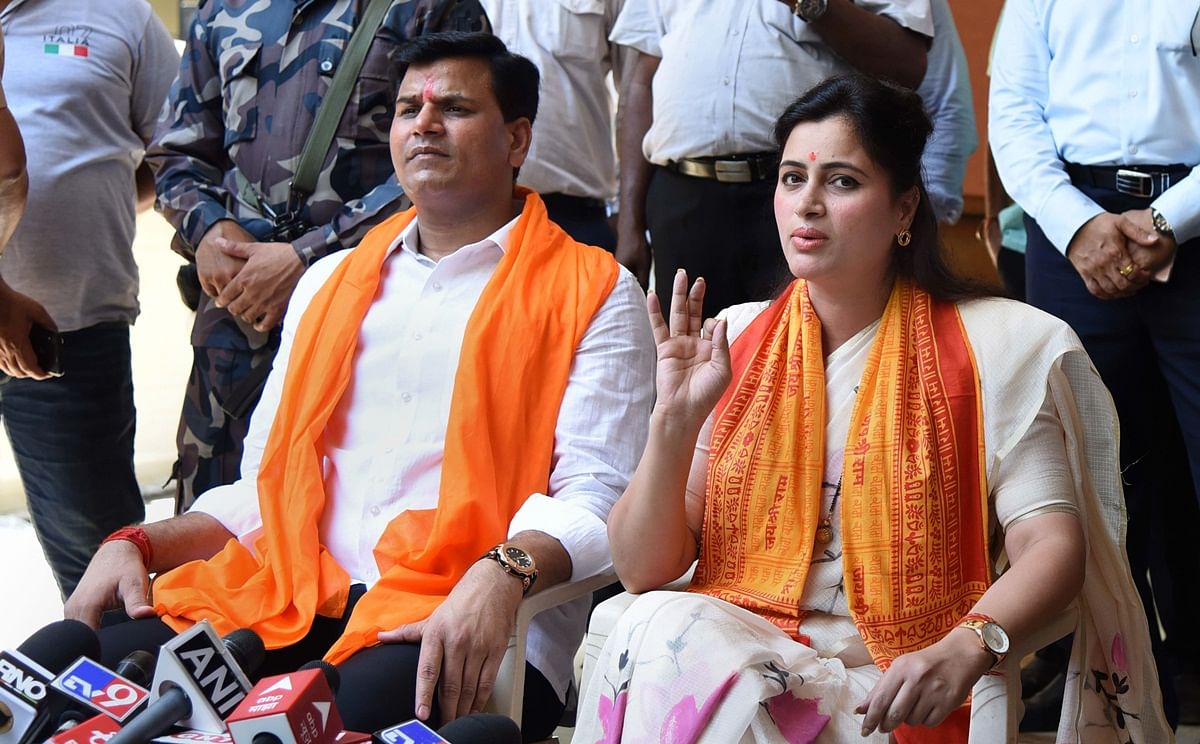