The Free Press Journal had prominently highlighted (Water Shock! MBMC’s Water Test Lab Lies Unused as Faulty Meters Pinch Pockets of Users on 10, September-2021) the apathy of the civic administration, towards commissioning the much needed testing apparatus which had been gathering dust for more than 18 months. 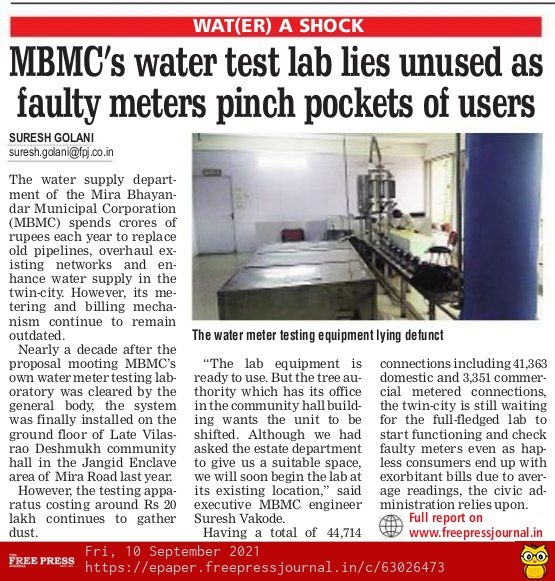 The MBMC spends crores of rupees each year to replace old pipelines, overhaul existing networks and enhance water supply in the twin-city. However, its metering and billing mechanism continues to remain outdated.

Nearly a decade after the proposal for MBMC’s own water meter testing laboratory was cleared by the general body, the system was finally installed on the ground floor of Late Vilasrao Deshmukh community hall in the Jangid Enclave area of Mira Road in 2020. However, the system remained inoperative owing to objections raised by the Tree Authority which shares its office space in the same building where the testing equipment was installed.

“The testing apparatus is ready-to-use and consumers can now get their water meters tested at a nominal charge of Rs.150. Trained personnel have been deputed who will operate the machine and generate certificates during office hours.” confirmed executive MBMC Engineer, Suresh Vakode.

Having a total of around 43,588 connections - 40,294 domestic and 3,294 commercial metered connections, the twin city's wait for a full-fledged lab to start functioning and check faulty meters has ended.

However, the region still lacks the mechanism to get the faulty meters repaired or replaced, forcing users to travel to Mumbai or Thane to get meters repaired needed to recommence regular billing on the basis of actual readings. Inflated bills raised on the basis of self- implied calculations under the garb of assessed bills are alleged to be a facade to conceal a huge quantity of unaccounted water, sources said.