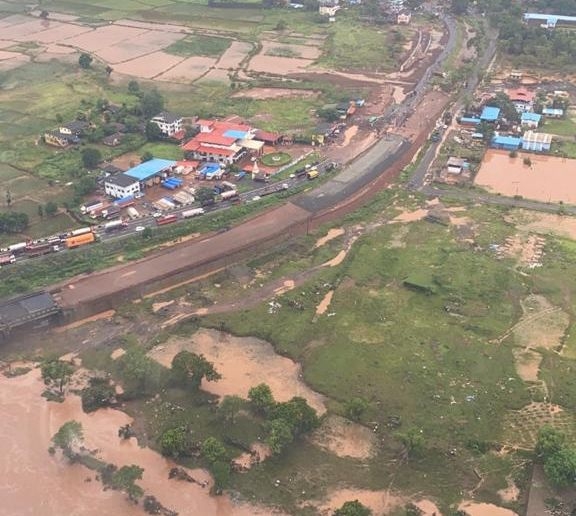 Exceptionally heavy rainfall recorded at Mahabaleshwar and Navaja in Satara district of Maharashtra over the last two days caused flooding in parts of the adjoining coastal region of the state, particularly Ratnagiri and Raigad districts, officials said on Friday.

Several places in these two districts in the Konkan region are inundated and the government machinery is taking steps to move the stranded people to safety.

K S Hosalikar, the senior scientist at the India Meteorological Department (IMD) in Pune, said that Mahabaleshwar, a popular hill station in Satara, received 483 mm rainfall in around 17 hours - between 8.30 am on July 22 and 1 am on 23 July.

Before that, during the 24-hour period ending 8.30 am on July 22, the same weather station had recorded 461 mm rainfall there.

As per the IMD, more than 204.4 mm rainfall in 24 hours is considered as extremely heavy rainfall.

However, the rainfall recorded by different state government department at Mahabaleshwar and Navaja indicate that the rainfall was more than that.

Geographically, Mahabaleshwar is one of the top points of the Sahyadri ranges (Western Ghats) that divides Maharashtra into the coastal region and the plateau.

Chiplun in Ratnagiri district is on the west side of Navaja, where more than 300 mm rainfall was recorded during the same period, officials said.

A senior IMD official said, "As the aerial distance between Mahabaleshwar and Mahad (in Raigad district) as well as in Navaja and Chiplun is not much, heavy rainfall at these top points led to water gushing down to these towns." In Mahad tehsil, which was battered with rains, Poladpur received 305 mm rainfall between July 22 and 23. If it continues to rains on Friday, it will be very difficult for the authorities to carry out search and rescue operations, an official from the Raigad district collectorate said.

Ratnagiri collector B N Patil has said that this was the worst rainfall that Chiplun has witnessed in the last 40 years.

A similar situation was witnessed there in 2005, but this time the water level in Chiplun city is above 10 feet, which has crossed the mark recorded 16 years ago, he said. Mumbai: ‘12 hours to reach home due to intense rainfall’