In the ongoing vaccination drive, Maharashtra on September 20 has vaccinated 8,89,012 people through 4,516 sessions.

According to data released by the government, Maharashtra, as of 7 am on September 21, inoculated 7,43,28,791 people.

As per the state government data, 2,66,69,923 individuals aged between 18 and 44 years received their first vaccine dose and 49,84,198 received their second dose since the inoculation drive for this age group began on May 1.

Similarly, 21,42,942 frontline workers in the state have till now received their first vaccine dose and of them, 16,85,177 got their second dose.

The daily cases and fatalities witnessed a marginal dip on Monday compared to the previous day when Maharashtra recorded 3,413 infections and 49 deaths.

More than seven months later, the state reported the lowest number of daily cases. Maharashtra had logged 2,515 cases on February 9.

Maharashtra's case recovery rate now stands at 97.18 per cent while the fatality rate is 2.12 per cent, the official said.

A total of 2,75,736 patients are in home quarantine in Maharashtra and 1,677 are in institutional quarantine, he added.

At 13, the Nashik region recorded the highest number of deaths due to COVID-19, followed by six fatalities from the Mumbai region.

Aurangabad, Latur and Akola regions did not report any fresh death due to coronavirus infection. Kolhapur and Pune regions reported four fatalities each, and Nagpur one, the official added. 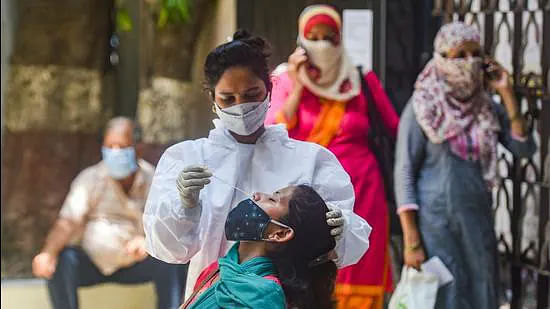