After Marathas get quota in Maharashtra, Dhangars in queue 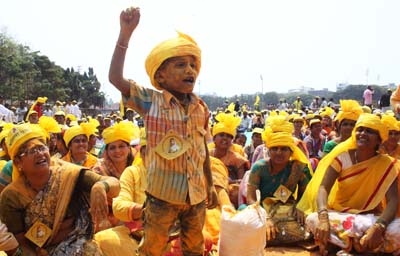 Mumbai: Last year, ahead of the Lok Sabha elections, the Maharashtra government cleared the long-pending quotas in education and jobs for Marathas and reaped rich benefits at the hustings, bagging 42 of the 48 Lok Sabha seats in the state.

Now, as the Assembly elections are round the corner, other groups including the Dhangar community (shepherds) are demanding separate reservation, as are Muslims and Lingayats.

The Maratha Kranti Thok Morcha (MKTM), which spearheaded the cause of the community's demands for past over four years, finally notched victory last year with the state government acceding to 16 per cent quota for Marathas with unanimous support from all parties.

However, the Bombay High Court later amended it to make it 12 per cent in education and 13 per cent in jobs under a new category of Socially and Economically Backward Class.

But, like Oliver Twist, the Marathas "want some more" and are now eyeing a direct role in the state polity - several factions of the MKTM announced this week that they plan to contest a majority of the 288 assembly seats in the upcoming elections.

The Marathas are around one-third of the state's 11.5 crore population and could pose a significant challenge to both the ruling Bharatiya Janata Party-Shiv Sena combine and the Opposition Congress-Nationalist Congress Party alliance.

Their justification for attempting to get a chunk of power "is improper implementation of the quotas which could still be challenged legally," according to MKTM leader Abasaheb Patil.

On the other hand, the Dhangars have got reservation under the Vimukta Jati & Nomadic Tribes (VJNT) category in the state, but are demanding it under the Scheduled Tribes (ST) category.

Revenue Minister Chandrakant Patil had said that the government is fully committed to providing the quotas to the Dhangars under the ST by changing it from the existing VJNT.

Rashtriya Samaj Party chief and Dairy Development Minister Mahadev Jankar, who is also a prominent Dhangar leader said the state government is working on it and hopes to clear it before the assembly elections.

The Dhangars are a significant chunk of around 9.5 crore of the state population spread mainly in Marathwada and Western Maharashtra, and can make or mar prospects of candidates in around 35 assembly seats.

Intensifying the agitation earlier this year under the ST category, the Dhangar Welfare Association said that 'Dhangad' get reservations elsewhere in the country under the Scheduled Caste (SC) category.

In Maharashtra, an alleged typographical error had created the problems and the Dhangars were included in the VJNT category in the state instead of ST group.

Jankar said that as far as the Dhangars were concerned it was a technical issue and the state government is in touch with the centre to resolve it amicably, as assured by the BJP during the campaign in 2014 elections.

It was part of the arrangement which saw the RSP, a NDA constituent joining the government with Jankar being made a Member of Legislative Council and also a cabinet minister.

The ruling BJP-Sena are hopeful of a prompt response from the centre on the pending issue of the Dhangars to win their hearts - and a few more seats - in the assembly elections.