After Ambedkar memorial, BJP might ignore Sena on govt’s 1st anniversary too 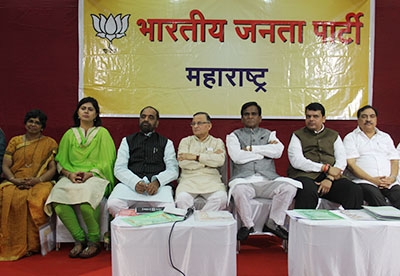 Mumbai : The Bharatiya Janata Party (BJP) is likely to ignore its ally in the government, the Shiv Sena, in celebrating the first anniversary of the government next month. There was not even a word about Shiv Sena’s participation at the meeting of BJP MLAs and office bearers held on Thursday to discuss anniversary celebrations.

It may be recalled that there were allegations last week during the foundation stone ceremony of Babasaheb Ambedkar’s memorial at Indu Mill land, that Shiv Sena chief Uddhav Thackeray was purposefully kept away from the prime minister’s function under the pretext of ‘protocol’, while most of the factions of the RPI and other smaller allies were present at the ceremony.

The BJP, after a meeting of party MLAs and key office bearers, which was presided over by Chief Minister Devendra Fadnavis and BJP Maharashtra president Raosaheb Danve, said that achievements of the Fadnavis government over the last year were deliberated upon and a roadmap for celebrating the anniversary was discussed. “CM Devendra Fadnavis appealed the party workers to effectively take the achievements to the people at the meeting,” state BJP’s chief spokesperson Madhav Bhandari said. “The party will hold grand ‘interactive’ programmes across the state from October 19 to celebrate one year of its government in the state.”

“Last year, we won elections on October 19 and took oath on the 31st. Hence, we have decided to hold various programmes from October 19 to 31 wherein we will interact with people and tell them what the government has done,” Bhandari said.

Party leaders and elected representatives will hold programmes at the divisional, district and taluka levels to talk to people on government decisions, he said. The party will print materials like booklets and CDs that will be distributed among people upto the tehsil level, he added.

“Different wings of the party, like the youth wing and women’s wing, will hold separate unique programmes. The idea is to ensure that we interact with the maximum number of people. Social media cell will also take part in ‘Lok Samvad’ (interactive sessions),” he said. State leaders will address these select 50 workers who will carry forward their work at the divisional level. Though the programmes will be held till October 31, we may extend it for 15 days if required,” he added.

When asked about the party’s relations with the Shiv Sena, Bhandari said, “The meeting was organised only to discuss the government’s achievements and there was no mention of Shiv Sena at the meet.”

A committee of key party functionaries, that would oversee the anniversary programs, too was announced at the meeting.

It was widely speculated ahead of the meeting on Wednesday that the worsening relations with the Sena were likely to come up for discussion. But, there was no mention of it, party functionaries maintained.