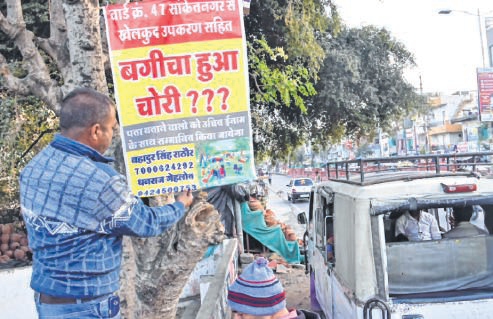 Ujjain: Saket Nagar in the city has a distinction of having a park which exits only on government records. The park can very well be termed as stolen park- as nothing exits on ground even though the municipal officials have shown the development work of the park as done.

Social worker and resident of ward number 47 blamed municipal officials for committing financial irregularities in the name of construction of the ‘park’ in Saket Nagar. Not just this the residents went ahead and placed a hoardings with caption- Garden stolen with sports items, informants will be feted. The posters were placed at Tower Square and other areas of the city.

Social worker Dhanraj Gehlot alleged municipal officials used the fund for the park construction and purchasing of sports goods somewhere else. He alleged this is not the first instance rather funds for construction of park have been used many times over. But there is no park in the area and not single sport equipment was purchased for the resident of ward 47.

Gehlot said he has evidences which show the municipal officials allotted money for the renovation of the park in the area but there is no park in the area. He told that complaints made to IG, collector and municipal commissioner in this matter have gone unheard.

He produced evidences before the officials and asked for an urgent probe in the matter. Gehlot also accused colony cell in-charge Dongarsingh Parihar, coporator Vijaysing Darbar, park in-charge Yogendra Gangrade, contractor Kamlesh Pagariya and the zone head of involvement in the scam.