To ensure that there is no further delay in the trial in the 2008 Malegaon bomb blast case, the Bombay High Court (HC) on Wednesday directed the special court under the National Investigation Agency Act to submit a report on a fortnightly basis regarding the progress of the trial.

A division bench of Justices Revati Mohite-Dere and VG Bisht also directed the National Investigation Agency (NIA), which probed the case, to ensure that more than one witness is kept present in court for examination to ensure that the trial is not unnecessarily adjourned.

The court has also asked the investigating agency to submit roznama (record of the day's proceedings in the trial court) for the last month on the next date of hearing on 1 August.

The HC was hearing a petition filed by Sameer Kulkarni, an accused in the case, alleged that the trial is being delayed and several relevant witnesses are yet to be examined in the case even after 14 years. He even pointed out the despite the orders of the HC and the Supreme Court which directed speedy trial, the trial was progressing in a tardy manner.

Following earlier HC directive, the special judge submitted a report in a sealed cover. The new special judge had taken charge on June 6 this year and since then 12 witnesses have been examined. The special judge further said that the trial was progressing on a day to day basis as was directed.

An affidavit was filed by NIA stating that out of 495 witnesses, 256 witnesses have been examined so far. Examination of 218 witnesses remains.

After going through the report, the HC asked the special judge to submit a progress report fortnightly.

Kulkarni, who argues in person, informed the HC that only one witness is summoned at a time. In the event, the witness does not appear before the court, there is no back-up witness and the trial gets adjourned.

Expressing concern over this, the HC asked NIA counsel Sandesh Patil to ensure that more than one witness was present in the court. 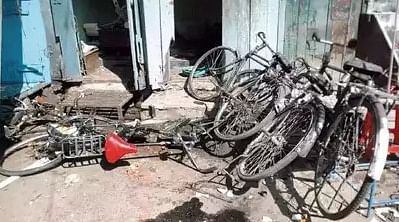