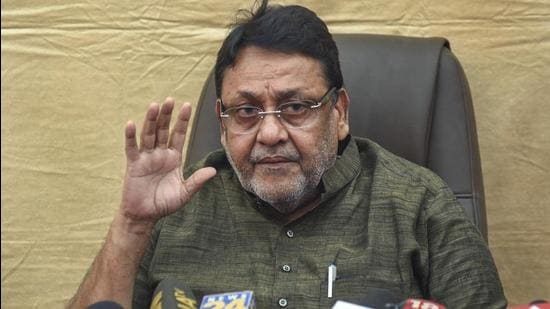 Nationalist Congress Party (NCP) leader and state cabinet minister Nawab Malik on Monday appeared before a Sewree magistrate court in response to a summons to him earlier this month in a criminal defamation complaint by BJP worker and former party youth wing leader Mohit Bharatiya for allegations made on him in connection with Aryan Khan case.

The court granted Malik bail on furnishing a surety and executing a bond, his advocate Ramesh Patil said. On Nov 8, the magistrate court had summoned the politician after finding that prima facie the words spoken by Malik had harmed Bharatiya’s reputation. It had found that prima facie the ingredients of the offence of criminal defamation were proved.

The complaint arose from Malik’s tweets, TV interviews and a press conference in connection with the Narcotics Control Bureau’s (NCB) functioning in the Aryan Khan drugs case. The minister had alleged that Bharatiya’s brother-in-law was among 14 persons detained by the NCB during its raid on luxury cruise ship Cordelia on Oct 2, in which Aryan too was detained. He had indicated that the relative was let off by the agency due to the influence exerted by Bharatiya.

On Monday, Bharatiya through his advocate Faiz Merchant also filed a plea to initiate contempt proceedings against Malik. He said that though aware of the order of the court, Malik did not stop his defamatory remarks against him. He also alleged that Malik campaigned on social media urging his partymen to gather in the court on the day he was summoned. He said many political colleagues of Malik also gave similar calls and hence they too stand in contempt of court.