Thiem too strong for Zverev at French Open

Paris :  Dominic Thiem confirmed his status as an outsider to win the French Open title at Roland Garros on Saturday with a 6-7 (4/7), 6-3, 6-3, 6-3 third round win over German teenager Alexander Zverev.

In what was a clash of two of the sport’s rising new stars, the Austrian dropped a tight first set, but then coasted away from his 19-year-old opponent.

He will next play Spain’s Marcel Granollers, who reached the last 16 without hitting a ball after nine-time champion Rafael Nadal withdrew due to a wrist injury. 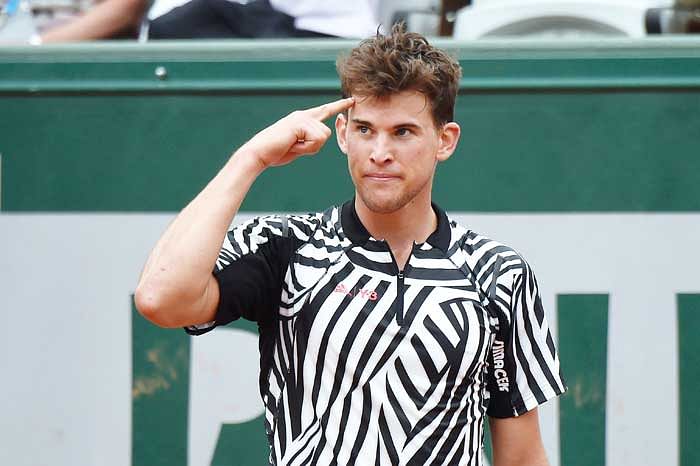 If he wins that, it will be the first time that 22-year-old Thiem has reached the quarter-finals of a Grand Slam tournament.

“It’s been the third match in the last four weeks between us and it was really tough, but I knew that from the start already,” he said.

“It was my first match on one of the big stadiums (at Roland Garros) and it was packed. An unbelievable experience.”

Thiem went into the match having won the most matches (22) on clay so far this season, including two titles at Buenos Aires and Nice, hoisting him to a career-best 13th in the world rankings in March.

He struggled early on to cope with the baseline power-hitting of Zverev, but his claycourt skills started to unsettle the towering German.

Thiem failed to convert three set points in the 12th game, however, setting up a tie-breaker that Zverev won after taking the first four points.

That setback only served to fire up the Austrian, a former junior world No.2, as he started to put more power into his groundstrokes.

He took the second set 6-3 and then broke Zverev in the third game of the second to take control of the match.

Zverev, bidding to become the youngest player to reach the last 16 at Roland Garros in 10 years, tried to attack the net in the fourth set but Thiem was too solid from the baseline, grabbing the break he needed in the fourth game.

In the women’s tournament there were early wins for eighth seed Timea Bacsinszky of Switzerland, 18th seed Elina Svitolina of Ukraine, over former champion Ana Ivanovic, Spain’s Carla Suarez Navarro and Kazakhstan’s Yulia Putintseva, who reached the last 16 of a Grand Slam tournament for the first time.

Top seed Novak Djokovic was scheduled for the last match up on the Philippe Chatrier centre court, his chances of becoming just the eighth man to win all four Grand Slam titles hugely helped by Nadal’s shock withdrawal.

He was taking on Slovenia-born Briton Aljaz Bedene for just the second time having defeated him in straight sets in the first round of last year’s Australian Open.

Both the Williams sisters were on the schedule ahead of a potential semi-final showdown.

Top seed and defending champion Serena, who is seeking to clinch a record-equalling 22nd Grand Slam title, was playing former junior champion Kristina Mladenovic of France, while Venus faces another Frenchwoman Alize Cornet. Cornet made headlines in the last round when her vanquished opponent Tatjana Maria of Germany angrily accused her of faking injury to gain time to recover from a severe bout of cramps.

The bad feeling from that clash spilled over with Maria saying that her camp were considering taking legal action for a violation of the rules against the International Tennis Federation, the WTA or the French Open.