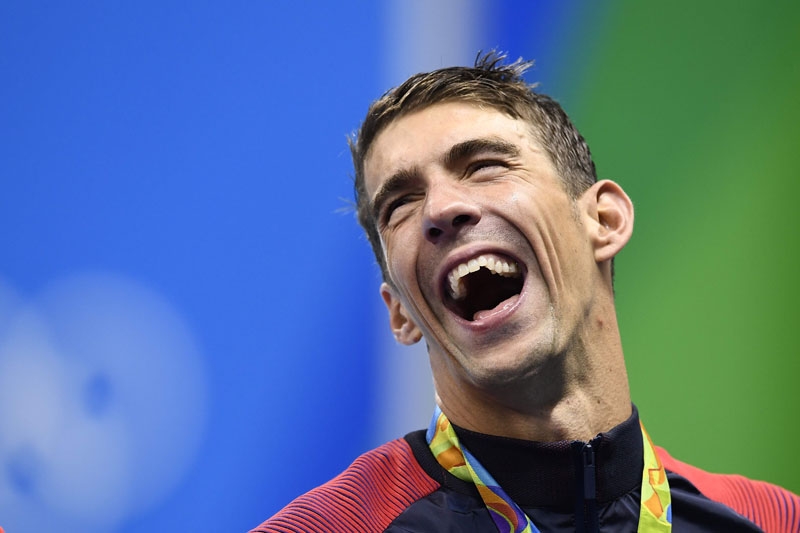 USA's Michael Phelps laughs while posing with his gold medal on the podium of the Men's 4x100m Freestyle Relay Final during the swimming event at the Rio 2016 Olympic Games at the Olympic Aquatics Stadium in Rio de Janeiro on August 7, 2016. / AFP PHOTO / GABRIEL BOUYS |

Earlier, Adam Peaty ended 28 years of Olympic hurt for Britain’s male swimmers as he romped to gold in the 100 metres breaststroke final in Rio, smashing the world record for the second time in two days.

Cheered on by fiancee Nicole and toddler Boomer in the stands, the peerless Phelps again provided the spark, producing a blistering 47.12-second leg to overtake France’s Fabien Gilot and set up victory in the 4x100m free.

Nathan Adrian anchored the Americans to a time of 3:09.92 to end French dominance of the event stretching over the past two world championships and the London Olympics four years ago.

“It was crazy,” said Phelps, competing in his fifth and final Games.

“I was standing on the block while Caeleb (Dressel) was coming in and I honestly thought my heart was going to explode out of my chest.

“We wanted that race back so badly,” added Phelps, who hugged team mate Ryan Held on the podium as he sobbed tears of joy.

“They were making us cry. The younger guys started crying, I started crying. My last 400 free relay ever, it feels damn good to get a win.”

In contrast to the Brazilian crowd’s love-in with a fist-pumping Phelps, however, there was genuine animosity when Russian Yulia Efimova, who escaped a drugs ban to compete in Rio, was introduced before the 100m breaststroke semi-finals.

That paled compared to the boos that greeted the Russian men’s 4x100m freestyle relay team, however, as fans and athletes supporting team mates vented their irritation after months of doping scandals.