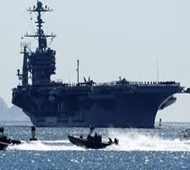 Beijing: China is sending some of its most advanced naval assets to the South China Sea for a scheduled exercise this month. Those include a new guided missile destroyer.

The exercise will be focusing on anti-missile warfare and other tasks, Xinhua news agency reported on Wednesday.

The report said it was routine and did not specify whether it would be held near disputed islands that several regional nations, including China, consider their territory.

Beijing was claiming sovereignty over a big chunk of the sea, which is a major trading route and is believed to be rich in minerals. Contesting claims have been made by the Philippines, Brunei, Vietnam, Malaysia and Taiwan.

China is furthering its presence in the region by reclaiming artificial islands and turning building infrastructure on them, including airstrips capable of launching warplanes.

The US is rejecting China’s claims and challenges Beijing by conducting freedom of navigation missions. Washington sends military ships and warplanes through the space, which China considers under its sovereignty.