Ujjain (Madhya Pradesh): The body of a driver, a resident of Shankargarh (in Dewas), was found under the Maksi Road railway over bridge. He had gone to his in-laws’ house. The brother has accused the in-laws of harassment. It is suspected that the man had consumed insecticide. The wife of Prakash Dayma (40) had come to her house. He went to pick-up his wife from his in-laws’ house on Sunday. But his wife refused to go with him. After this, his body was recovered beneath the railway over-bridge. Brother Manohar Dayma said that Prakash was upset with his in-laws. His father-in-law Dilip Khichi, brother-in-law Sitaram Khichi and Om Khichi used to harass him. They wanted to be with Prakash whereas his financial condition was not such that he could keep everyone together. Prakash is survived by his wife, two sons and a daughter. The younger son and daughter were with his wife Khuja Bai, while the elder son was with Prakash in Shankargarh. After post-mortem, the body was handed over to the deceased relatives. 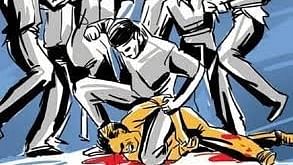