Badnawar: At the time when the state government is leaving no stone unturned to give good infrastructure and development at every nuke and corners, foundation stone tables of as many 24 developmental works at Koteshwar Mahadev Dham and its adjoining areas near Badnawar village of Dhar district is gathering dust, saying the fact that they were laid five years ago.

On February 28, 2016, chief minister Shivraj Singh Chouhan visited Koteshwar Mahadev Dham where various development works were inaugurated and the foundation stone was laid. Since then, many works have been completed but few are yet to begin. Their foundation stones are gathering dust in the Rural Engineering Services (RES) office here. In five years, they have not been installed at the workplace by the concerned departments. Now the officers are busy shifting the onus on each other for this negligence. 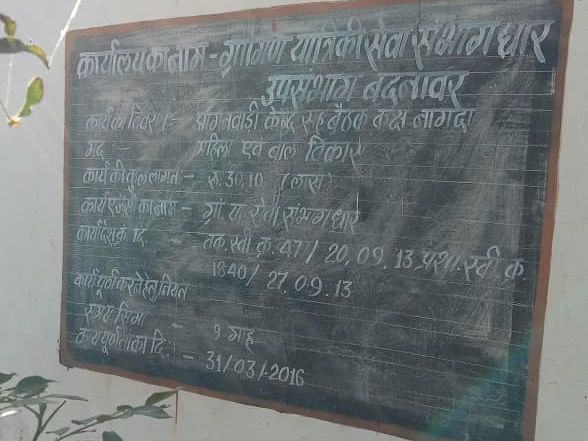 Earlier, in 2016, soon after the announcement of chief minister’s visit to the Koteshwar Mahadev, all the departments had prepared the inscriptions of the foundation stones and inaugurations by making a list of works at their own level. According to the list, the chief minister had laid the foundation stone and performed Bhumi Pujan together with the inscription placed at the venue of the program. Some of the departments in the said inscription have got it installed at the workplace after some time.

The RES department kept about 24 inscriptions foundation tablets, including foundation stone and inauguration stones at the office. Now even after five years, many works were completed during this period, but the inscriptions did not move from their place.

When contacted RES sub-divisional officer (SDO) Rajesh Parmar, he said that many of the works which were declared and performed Bhoomi Pujan of by the chief minister are still remaining. As soon as work gets completed, foundation stone tablets will be installed.

As per the information received from the sources, the amount of many schemes announced was not approved yet, only the inscriptions of the foundation stones and inaugurations were made. Now this is also the subject of investigation.