Madhya Pradesh: A flight fails to take off due to technical snag

Later on the passengers of the flight were accommodated to another flight of the same airline which took off at 2:30pm.
Staff Reporter 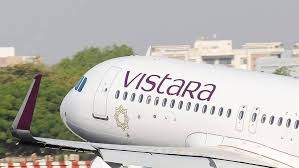 Indore (Madhya Pradesh): A flight of Vistara airlines has failed to take off because of technical snag at Devi Ahilyabai Holkar Airport on Monday. The flight was scheduled to take off at 8.40 am from Indore to Delhi.

Later on the passengers of the flight were accommodated to another flight of the same airline which took off at 2:30pm.

According to the official of the airport, the flight arriving from Delhi has landed normally at the airport in the morning. There were 148 passengers in the flight. Later on the flight has to take off with 113 passengers from Indore to Delhi.

While taking off the flight to Delhi the pilot and technician team had found some technical snag because of which it could not took off, he added.

After that the passengers waited till afternoon and another flight arrived at the airport which accommodated passengers and took off at 2:30pm from the Indore airport.