In this accident, the bus driver, students named Ayush Choudhary, Aryan Choudhary of Kample village, Vedika of Pipalda village and three others were injured and have been admitted to the hospital

Indore (Madhya Pradesh): Six students and the driver got injured after their college bus overturned in Khudel area on Wednesday. The accident happened while trying to avoid a vehicle coming from the opposite side on a turn. The police are taking the statements of the students in the bus. There were 25 students but fortunately, no major casualty was reported.

SI Satyendra Singh Sisodiya from Kample police post under Khudel police station jurisdiction said that the accident happened near Tillor Bujurg around 4.30 pm. The bus of a private college was going to drop students home at the time of the accident. When the bus was taking a turn, a loading vehicle came from the opposite side. The driver in a bid to avoid collision turned the steering and the bus overturned.

In this accident, the bus driver, students named Ayush Choudhary, Aryan Choudhary of Kample village, Vedika of Pipalda village and three others were injured and have been admitted to the hospital. Other students escaped with minor injuries. The police will check the fitness and permit of the bus and the documents of the driver. Also, the information is being taken from the children to know whether the driver was driving recklessly.

A preliminary investigation has revealed that there were 25 students in the bus. Some of the students came out of the bus through the gate and the windows and some of them were taken out by the villagers. Meanwhile, the police reached the spot and sent the injured people to the hospital. After the statements of the students, the police would take further action into the case.

Read Also
Indore: ‘Officers & employees must be present at office in time’ 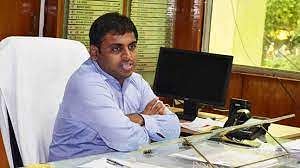