Watch video: Last rites of former UP CM Kalyan Singh to be conducted on Monday even as row erupts over flags at his prayer meet 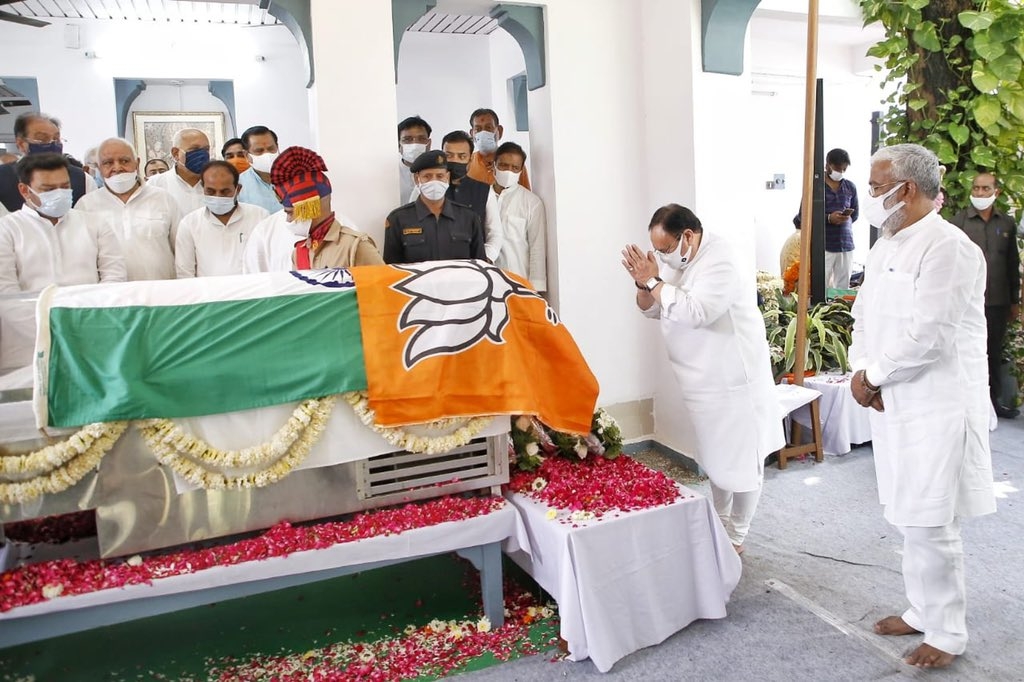 Aligarh/Bulandshahr: The mortal remains of former Uttar Pradesh Chief Minister Kalyan Singh will be cremated at the Narora Ghat in Bulandshahr on Monday afternoon.

Aligarh BJP MP Satish Gautam, said: "The funeral procession will begin from the stadium at 9 a.m. on Monday. After a brief halt at Atrauli, it will reach Dibai where the last rites will take place around 3 p.m."

Chandrapal Singh, a close aide of late leader, said: "He always chose Atrauli over Dibai, but maintained that Aligarh is his 'Janambhoomi' while Bulandshahr his 'karambhoomi'. Therefore, he is being cremated in Dibai."

Singh considered Dibai his 'karambhoomi' because he was elected to the Lok Sabha from Bulandshahr once and twice to the state Assembly from Dibai constituency. Dibai is also the nearest Ganga ghat.

The BJP's top brass is likely to be present during the last rites, with workers claiming that over 5 lakh people are expected to attend the cremation.

Meanwhile a photograph of the BJP flag placed over the national flag on the mortal remains of late Uttar Pradesh Chief Minister Kalyan Singh kicked up a controversy on social media.

The photo, tweeted by the BJP, shows the body lying in state, draped by the Tricolour, but half of it was seen to be covered up by the party flag. The party flag was placed on Singh's body over the national flag by BJP President J.P. Nadda and state BJP President Swatantra Dev Singh.

Samajwadi Party spokesperson Ghanshyam Tiwari criticised the BJP on the issue. "Party above the Nation. Flag above the Tricolour. BJP as usual: no regret, no repentance, no sorrow, no grief," he tweeted. Road leading to Ram Janmabhoomi in Ayodhya to be named after former CM Kalyan Singh: UP Dy CM Maurya