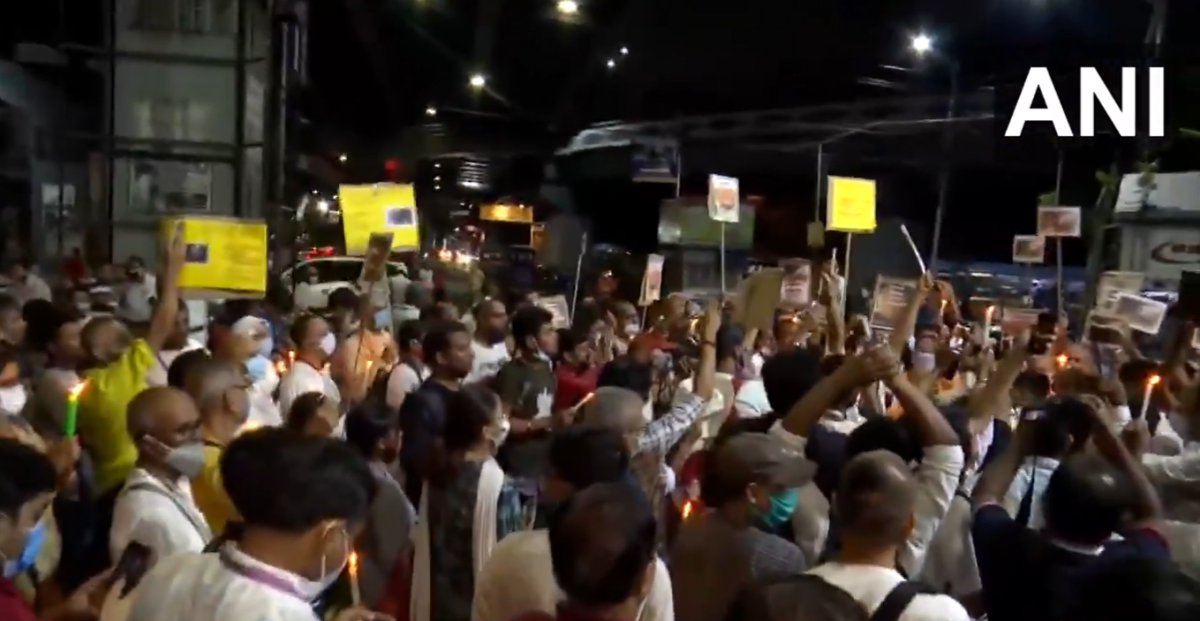 Amid communal violence in Bangladesh during the last days of Navratri, an ISKCON temple in Noakhali was vandalised leading to many protests staged by Hindus there. Reports said the possible involvement of Islamic extremist groups in Bangladesh trying to stir up trouble and cause communal conflict between the two communities is being investigated. At least four persons have been killed and 70 others injured in the attacks in the last three days.

In the wake of the communal violence and attacks on temple, the ISKCON Kolkata sang 'bhajan' and protests outside Bangladesh Deputy High Commission in Kolkata. The followers of the ISKCON group and devotees singing bhajans loudly held sign boards demanding action of Banagladesh government against the mishappenings.

"Cycle of violence in Bangladesh in past few days hasn't stopped. There was dance of death inside ISKCON temple on Friday. ISKCON will continue to protest outside Bangladesh High Commissions across the world until the guilty are punished," said Radharaman Das, Vice Pres, ISKCON Kolkata.

On Friday, a mob allegedly attacked an ISKCON temple in Bangladesh's Noakhali district and according to the community, one of its members was killed.

#WATCH | West Bengal: ISKCON Kolkata sings 'bhajan' and protests outside Bangladesh Deputy High Commission in Kolkata following the incident where an ISKCON temple in Noakhali, Bangladesh was vandalised and a devotee killed by a mob yesterday. pic.twitter.com/z60fteEFUp

It is with great grief that we share the news of an ISKCON member, Partha Das, who was brutally killed yesterday by a mob of over 200 people. His body was found in a pond next to the temple. We call on the Govt of Bangladesh for immediate action in this regard," the official Twitter handle of the ISKCON community said.

While speaking to ANI, Radharaman Das, said, "We called PM residence and requested his secretary to inform PM that he should speak with Bangladesh PM to end this cycle of violence. Yesterday, around 500 mobs entered our temple premises and broke deities, brutally injured devotees. Two of them died." "We've written a letter to United Nations and appealed them to condemn this and send a delegation to Bangladesh," said Radharamn Das.

Meanwhile, the chief of Bangladesh's minority body has called for a day-long demonstrations on October 23 to protest the recent incidents of violence including attacks on Hindu temples. 'Why is PMO silent?': Trinamool Congress after ISKCON temple vandalised in Bangladesh