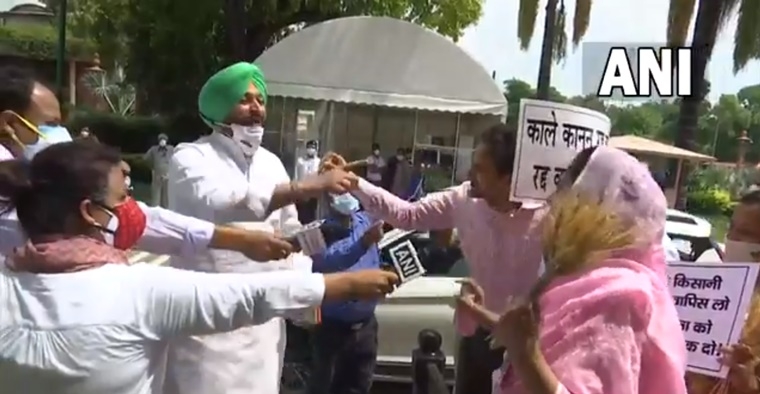 In the video, which was shared by news agency ANI, Congress MP accused Badal of doing 'drama' and said that she did not oppose the Bills when they were passed in the House.

Replying to Ravneet Singh Bittu, Harsimrat Kaur Badal slammed the Congress MP and questioned where was he and Rahul Gandhi when the Bills were passed in Parliament.

Meanwhile on Monday, In a unique protest, Shiromani Akali Dal (SAD)-Bahujan Samaj Party (BSP) MPs anded over wheat stalks to parliamentarians to highlight the plight of the thousands of farmers who are leading a peaceful protest on the borders of Delhi and seek justice for them.

Former Union Minister Harsimrat Kaur Badal, who was leading the protest, offered the wheat stalks to NDA ministers and MPs and asked them to introspect about the treatment being meted to the farmers by the Union government.

Addressing the media, Harsimrat Badal said: "If we are partaking our daily bread, we have only farmers to thank. It is shocking that a community to which everyone is beholden is being persecuted by the Union government which refuses to repeal the three black agriculture laws.

"Today we distributed wheat stalks to MPs to appeal to the conscience of our policy makers to be just to the hand that feeds them."

She said it was condemnable that the Union government had "shut its eyes to the suffering" of farmers camped on the borders with Delhi for the past eight months.

She said the SAD-BSP parliamentarians had been demanding a discussion on the need for repeal of the three farm laws since the first day of the start of the Monsoon session.