Jadeja currently is campaigning for his wife Rivaba, who is contesting the Gujarat Assembly elections from the Jamnagar North.

WATCH: Ravindra Jadeja recalls the time when Modi introduced him to MS Dhoni as 'Apna Ladka Hai' |
Follow us on

On Monday, November 21, Twitter handle @themodistory tweeted a video of Indian cricketer Ravindrasinh Jadeja recalling how the then Chief Minister of Gujarat, Narendra Modi, introduced him to then India captain, MS Dhoni.

Ravindra Jadeja recalled the first time he came in contact with Narendra Modi, "In 2010, when India was playing South Africa at Motera Stadium in Ahemdabad. Narendra Modi was the chief minister of Gujarat, he introduced me to Indian captain MS Dhoni as 'Apna Ladka Hai, Sambhal lena', which translates to 'He is our boy', take care of him," Jadeja recalled.

Jadeja currently is campaigning for his wife Rivaba, who is contesting the Gujarat Assembly elections from the Jamnagar North.

Jadeja also met the Home Minister, Amit Shah, today on the sidelines of the assembly elections, Jadeja took to Twitter to tweet about the meeting by posting pictures with him, "pleasure meeting you sir." 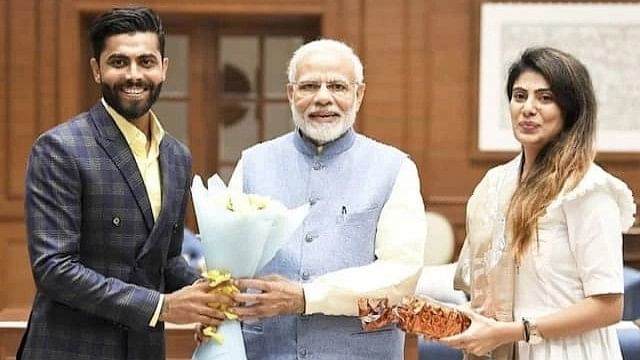 Rivaba Jadeja, the BJP candidate from the Jamnagar constituency, and wife of Indian cricketer Ravindra Jadeja, on Saturday refuted all claims of existing feud in the family and said that the two just believe in different ideologies.

Among the many popular candidates for the upcoming Gujarat Assembly elections, is Rivaba Jadeja. Incidentally, two names from the Jadeja family are facing each other in the elections, as Ravindra Jadeja's sister Naina Jadeja is campaigning for the Congress candidate from the same Jamnagar seat.

While exclusively talking to ANI, she was asked about the claims of feud within the family, to which Rivaba said that this is not the first time when two people from the same family have different ideologies.

"Even on our hands, all fingers are not equal in size, similarly ideologies too can be different. My sister-in-law is influenced by some other ideology and is working for it, in the same way, I am influenced by BJP and am fulfilling my duties. There is only a difference of opinion and no personal differences between the two of us. During this peak election time, we obviously don't get the time to sit together," she said.

She also said that currently, her focus is only on reaching out to as many people as possible.

On being asked about the possibility of a tripolar election in Gujarat and Aam Aadmi Party's chances in Gujarat, Rivaba refuted any such possibility.