Uproar after Salman Khurshid compares Hindutva to ISIS and Boko Haram in his book 'Sunrise Over Ayodhya': Who said what 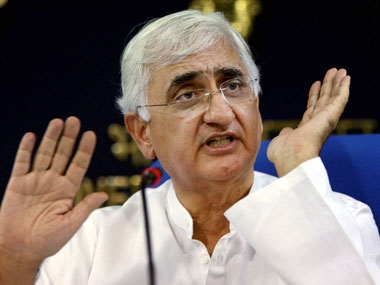 Uproar after Salman Khurshid compares Hindutva to ISIS and Boko Haram in his book 'Sunrise Over Ayodhya': Who said what | File Image

Reportedly, the comment has been made in a chapter called 'The Saffron Sky'. On page no.113 of the book, he has stated that "Sanatan Dharma and classical Hinduism known to sages and saints were being pushed aside by a robust version of Hindutva, by all standards a political version similar to the jihadist Islam of groups like ISIS and Boko Haram of recent years."

Meanwhile, this caused a huge uproar, with even his party colleague Ghulam Nabi Azad condemning the comparison.

Senior Congress leader Ghulam Nabi Azad dismissed as "factually wrong and an exaggeration" the comparison of Hindutva with the jihadist Islam of terrorist groups such as ISIS and Boko Haram in party colleague Salman Khurshid's latest book.

Azad, a former leader of Opposition in Rajya Sabha and a member of the Group of 23 leaders that wrote to party chief Sonia Gandhi seeking organisational overhaul, tweeted, "In Mr. Salman Khursheed's new book, we may not agree with Hindutva as a political ideology distinct from composite culture of Hinduism, but comparing Hindutva with ISIS and Jihadist Islam is factually wrong and an exaggeration."

A Delhi-based lawyer Vineet Jindal filed a complaint with the police against Congress leader Salman Khurshid for the remarks in his book.

In his complaint, the lawyer alleged that it is not only instigating and provoking statement but also stirring enraged emotions among the Hindu religion followers.

"Our constitution provides every citizen with the freedom of speech and expression but the misuse of this right is inexplicable when it threatens the honour and harmony of the country and provokes its citizens based on community and religion and threatens the security of the nation then it is considered as a grave offence," the petition read.

The lawyer demanded an FIR against Khurshid under 153,153A ,298 and 505 (2) of I.P.C which are cognizable offences and very serious and to take strict Legal Action.

Advocate Vivek Garg in his complaint is seeking to file a case against Khurshid.

"This reflects the true mindset of Congress as they try to legitimize the radical elements of ISIS by creating an artificial equivalence with Hindus. His statement printed in his book is itself self-explanatory and clearly discloses his commission of the cognizable offence. The language, intention of the said book authored by the alleged accused, is an open case of sedition, conspiracy to wage the war against India, promoting enmity between Hindus-Muslims, etc," Garg's complaint said.

"In this book Hinduism is compared to ISIS and Boko Haram," Bhatia said, adding that the Congress is weaving a web like a spider against Hindus.

Alleging that this is happening at the behest of Congress president Sonia Gandhi and Rahul Gandhi, Bhatia questioned her silence on the issue and said: "If you remain silent, then it will be clear that your ideology is also against Hindus."

Demanding Khurshid's removal from the Congress, the BJP spokesperson said, "Earlier, the term 'Hindu terrorism' was invented when the Congress was in power."

BJP IT cell head Amit Malviya in a tweet highlighted a paragraph of the book and said, "Congress's Salman Khurshid in his new book writes that Hindutva is similar to the jihadist Islamist groups like ISIS and Boko Haram. What else can we expect from someone whose party coined the term Saffron terror just to draw equivalence with Islamic jihad, to get Muslim votes?"

Talking to reporters, Joshi also said Sonia Gandhi, Rahul Gandhi and Priyanka Gandhi should visit a temple to reveal their 'gotra' (clan) and assert that they are Hindus.

"I want to ask them what action they are going to take against Khurshid who has insulted both Hindus and Hindutva," he said.

"Hindutva is not a religion but a way of life," he said.

Madhya Pradesh Home Minister Narottam Mishra said that he will consult law experts and get Salman Khurshid's new book on the Ayodhya verdict banned in the state.

"He has published a very controversial book. They (Congress) do not leave a chance to attack 'Hindutva', always trying to divide the country on the basis of castes. Even Supreme Court has said that Hindutva is a way of living," Mishra said.

Earlier, Mishra had said that Khurshid published his book 'Sunrise over Ayodhya--Nationhood in our times' to create a controversy.

"This book has been published to create controversies. Congress and Gandhi family belong to the 'Tukde-tukde gang'. They want the country to be divided. They want to hurt the beliefs of people. However, PM Modi wants undivided India," he had said.

Union Power and New Renewable Energy Minister RK Singh said: "It is a matter of great shame that you are denigrating the entire religion of our people in such a way that it is beyond tolerance. What is the Congress party doing? You are insulting people's religions and you think that we will tolerate this. You should use some brains!" "We are very tolerant, but not so tolerant that you insult our religion and we will keep quiet. He should understand," he said.