Trouble for Congress in MP: Kamal Nath rushes back to Bhopal after Scindia and MLAs go 'incommunicado'

Immediately after landing in Bhopal, Nath went into a huddle with veteran Congress leader Digvijay Singh and other senior ministerial colleagues at the CM's residence, sources said.
PTI

Madhya Pradesh Chief Minister Kamal Nath on Monday evening rushed back to Bhopal after cutting short his visit to Delhi in the wake of senior party leader Jyotiraditya Scindia and a group of MLAs suddenly going 'incommunicado', causing ripples in state political circles.

Immediately after landing in Bhopal, Nath went into a huddle with veteran Congress leader Digvijay Singh and other senior ministerial colleagues at the CM's residence, sources said.

In a curious political development amid reports of infighting in the state Congress and allegations of poaching, Scindia and at least 17 MLAs who are believed to be supporting him suddenly became 'incommunicado' by switching off their mobile phones, triggering speculations.

While calls made to Scindia by PTI remained unanswered, mobile phones of at least six ministers who are supporters of the Guna royal are switched off. Madhya Pradesh: Kamal Nath, Digvijaya Singh pull out all stops to save government

Nath had left for Delhi on Sunday night to meet top Congress leaders to discuss the current political situation in the state and nominations for the Rajya Sabha polls scheduled on March 26.

The political drama in the state began last week when ten Congress MLAs from Madhya Pradesh went 'missing'. The party pointed fingers at the BJP, which denied any role in it. 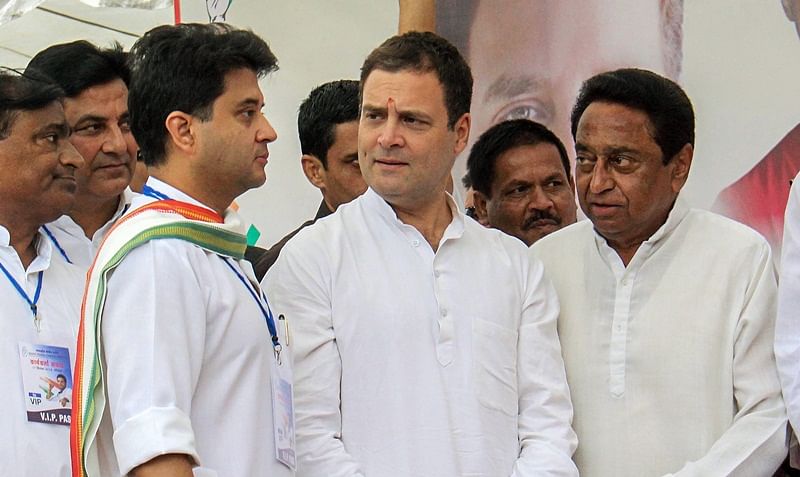 Since then, eight of the 'missing' legislators have returned and expressed their support to the ruling party in the state.

Of the two Congress MLAs who are believed to be camping in Bengaluru at present, Raghuraj Kansana belongs to the Scindia camp. Another 'missing' MLA is Hardeep Singh Dang.

Meanwhile, a supporter of Scindia demanded that the former Union minister be nominated as the party candidate for the Rajya Sabha polls.

"The party should also make Scindia the president of the state Congress unit. We are being sidelined in the party in Madhya Pradesh," he said.