Most of the pilgrims are from Ramanagara, Bengaluru Urban, Bengaluru Rural, Chikkaballapura, Mysuru, Mandya, Shivamogga, Bagalkot, Dakshina Kannada, and Kolar.

Over 370 pilgrims from Karnataka reportedly remained stranded following a cloudburst near the cave shrine of Amarnath in Jammu and Kashmir. There have been no casualties.

CM Basavaraj Bommai said that the state is in contact with the Centre and the Jammu and Kashmir government to rescue the stranded pilgrims. They are all safe and the state government is making efforts to bring them back, Bommai said.

“We have launched a helpline and the state chief secretary is in direct contact with the Union government. There is no report of any untoward incident related to Kannadigas. We are in touch with the Jammu and Kashmir government too,” Bommai said.

Most of the pilgrims are from Ramanagara, Bengaluru Urban, Bengaluru Rural, Chikkaballapura, Mysuru, Mandya, Shivamogga, Bagalkot, Dakshina Kannada, and Kolar.

According to Chandrashekar, who led the group of pilgrims from Nanjangud in Mysuru, the devotees had a narrow escape during flash floods that swept away a dozen tourists.

“We were just one kilometre away from the spot where flash floods claimed 16 lives. It happened some 15-20 minutes after we returned from darshan”, he said.

A group of 15 women from Shivamogga, including ex-deputy mayor Surekha Muralidhar, reached the base camp on Saturday and will arrive in Bengaluru on Monday.

Another batch of 55 pilgrims from the Kalaburagi and Bidar districts were sent back from Srinagar while on their way to Amarnath after visiting the Vaishnodevi temple.

The state has set up a 24/7 state emergency operation centre to reach out to relatives of the stranded and update them on the rescue measures. Emergency numbers have also been released: 080-1070, 080-22340676. 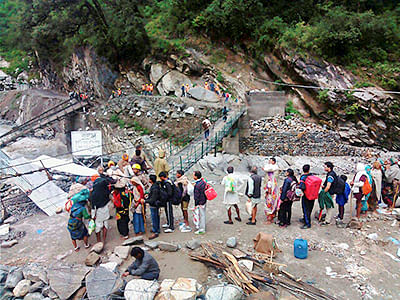