What would you expect when a Grammy award winning American hip-hop artist sits down for a fireside chat with a contemporary Indian mystic with a global following? Well, this is a conversation that echoes with a timelessness that makes it both contemporary and ancient as it unravels one of America’s best kept secrets – her rich spiritual and mystical past. Instead of an esoteric dialogue, it is an all-are-welcome invitation that pulls back the drapes to reveal an aspect of America that few are aware of. The hour-long “Indian to Indian” conversation was streamed live globally on a day that some parts of the United States celebrated as Indigenous Peoples Day in honour of the original inhabitants of the land.

Wit and wisdom on full display, Sadhguru, Founder-Isha Foundation, walks through his exploratory mystical journey of America with Jaime Luis Gomez a.k.a. Taboo of Black Eyed Peas, one of the most popular modern day hip-hop bands, in a conversation hosted by MC and DJ Marcus Guinn. 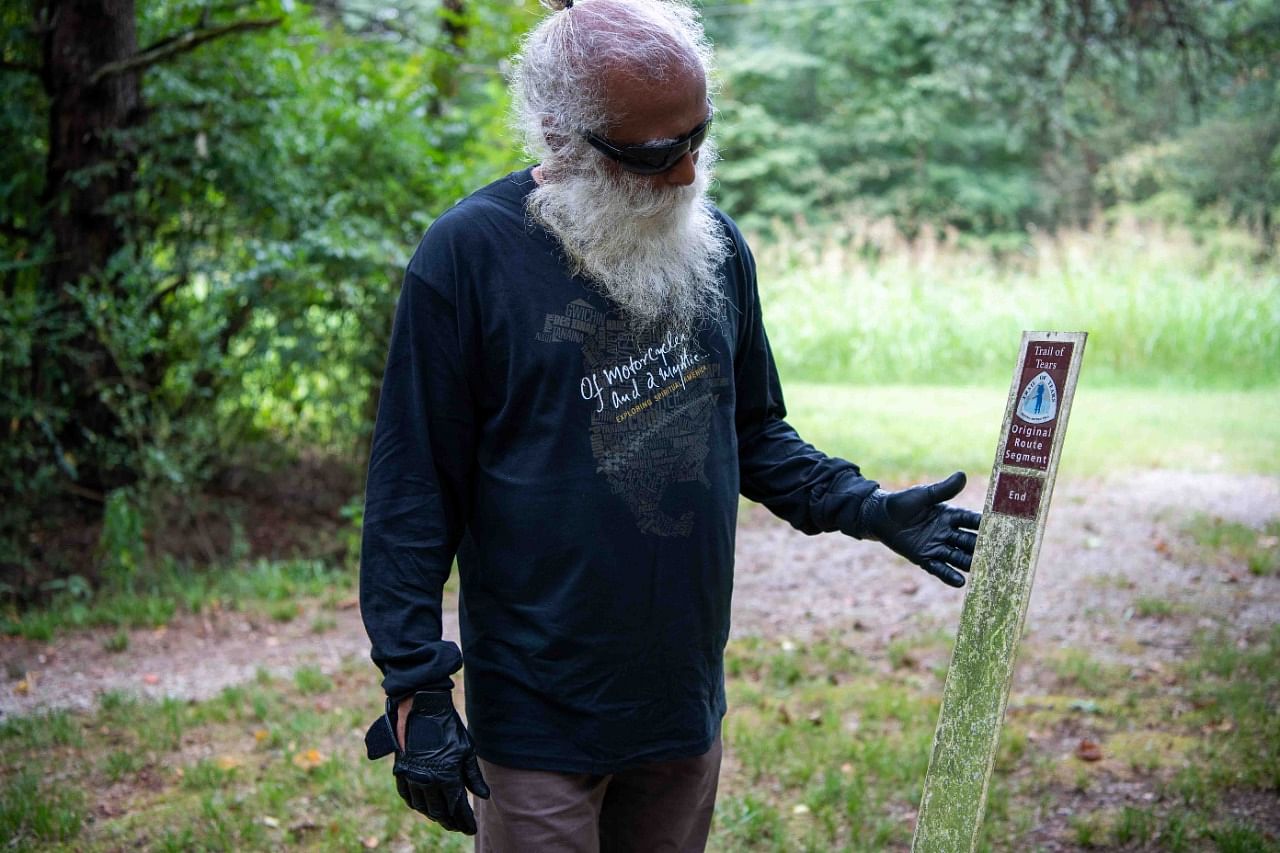 Marcus is curious to know what sparked the current journey. It dates back 17 years when the first seeds of exploration were sown after a chance encounter with a “frozen spirit” that can only be understood in Sadhguru’s own words: “This was in 2003. I was writing a book. Somebody offered me a small cottage near the Center Hill Lake in Tennessee near Cookville. I was staying there and working on this. One day, I (went for) a walk into the forest. Well, different people may understand this in different ways. I saw something – a kind of a frozen spirit just standing there in such a state of shame, pain and resentment.” It was the spirit of a man who could not protect the life of someone he held very dear. “He was killed. And he just stood there and froze as a spirit (in) shame, resentment, anger and pain above all. Probably, that’s been the most painful moment in my life. I’ve never seen that kind of pain.” Sadhguru penned a poem, America, after that encounter which he reads out to Marcus and Taboo. “On that day, I decided I need to know more about what happened and as I explored this, I realized this region in Tennessee was called the Trail of Tears. We were looking for land to set up our Center and we set it up right there at the beginning of the Trail of Tears. It is not the beauty of the place which drew me there, it is the pain of the place which drew me there.”

Sadhguru explains the significance of that decision. “My work, my life is to see that people can live without this pain. If a human being is willing, he can be beyond suffering. There are ways to do that to oneself. Only when people know the joy of being without suffering, can they walk full stride because there is no fear of suffering. Only when there is no pain and suffering in you, you will not cause that to other people. You know the value of being happy. This is very important for every human being.”

A Man in Search of his Roots

A 6-time Grammy winner and cancer survivor, Taboo speaks with earnest passion about discovering his ancestral roots as part of his healing process. Clearly moved by a force beyond articulation, Taboo terms his journey of self-discovery as a calling to lend his voice and support to the indigenous people of his land, sideswiped and alienated by the more material pursuits of modern day America of which he is a product himself. Admitting that he knows little about his roots - Shoshone, Hopi and Mexican - having grown up in Los Angeles, Taboo is now interested in learning about his heritage and ancestry. “I just want to be a student” he tells Sadhguru.

Listening to both Marcus and Taboo seeking answers from Sadhguru with a barely hidden thirst, one is acutely aware that they carry the pain of oppression of their people. It’s clear both are intrigued by a man who is being accorded a warm reception by the high priests of their cultures. Underlying the whole interaction is a sense of hope that this is a doorway to new possibilities for their people. Taboo says that he feels he has been led to this moment and talks about how he convinced Marcus to come out of retirement to join his cause leading an amused Sadhguru to quip, ‘This guy is retired? I don’t believe that!’

“When you hear about indigenous people in America being called Indians and you’re from India. How does that hit you? How does that make you feel?” asks Marcus. “Well, we’re glad the guy didn’t land in India,” Sadhguru deadpans sending both of them into peals of laughter and adds, “Sorry he landed here,” as he joins them.

Mato Tipila – an Enigma of Energy

Marcus whose mixed heritage includes Osage, Potawatomi, Delaware and Puerto Rican wants to know, “What was your time like in the sacred spaces you visited?” “I have too much to say about this,” Sadhguru begins and recounts his experience at Mato Tipila in Wymoing, a site held sacred by the Lakota Nation for its powerful energies. “Mato Tipila in my experience, is probably the most powerful space that you can see in this part of the world,” says Sadhguru who visited the monument on a full moon night. He speaks at some length about the energy body of human beings with its energy centers, often referred to as ‘chakras’ – a term popular in America – whose activation is critical to one’s journey and growth on the spiritual path. The throat center or vishuddi is considered the most powerful of the energy centers. Sadhguru reveals that he found the Mato Tipila had an explosive energy of vishuddi, a very rare phenomenon seen in not more than 2 or 3 places on the planet. “I was just amazed the way it was reverberating with this dimension of life,” he says adding that every indigenous person must connect with Mato Tipila. “Whether they go there physically or otherwise, they must connect with it. This is where the power is. The basis of your culture in some way energetically is here and connecting with that could also be the liberation for the future,” he tells Marcus and Taboo.

The Native Peoples’ strong and deep relationship with the land as much more than geography is worth emulating. Sadhguru says it is probably this sense of reverence that prevented them from engaging with land from a purely transactional and utilitarian approach. Their striking ability to align sound and form to create energy enhanced their perception of Life beyond the physical. Sadhguru calls this energy a result of the geometric symphony of the land and the sound matching together. “I think this is one of the reasons being here for thousands of years, they didn’t want to build anything. They consciously did not want to damage the land because they were feeling the land with sound and empowering themselves with that. In this process, this Mato Tipila is a significant influence.”

Back to the Future

One of the greatest contributions that indigenous people can offer the world is their intrinsic knowledge of how to forge a harmonious and non-conflicting relationship with the natural world says Sadhguru. Referring to Native Americans as the “most ecofriendly” people, Sadhguru observes that while everybody is talking about environment and ecology, it mostly lives in textbooks and universities. “The significance of Native Americans is environment lived in their hearts” and was not an abstract science in their experience. This aspect of their cultures must be brought forth strongly and will find resonance in today’s world “because everyone knows this needs to happen” says Sadhguru. “This one angle could make the entire indigenous people very relevant for today and tomorrow.”

Sadhguru responds to a question he has been constantly asked on his exploratory journey, in some form or the other, in his interactions with Native Americans: how should we frame our future? “It’s very important you’re part of the mainstream, that you don’t become an archival people. You’re living people, you’re part of this generation. At the same time, don’t give up your roots. It’s important that in your Reservations, you educate your children in your language, in your spiritual process, in mysticism and exploration, and the culture. But at the same time, you must do well in the modern world because you’re living people, you’re not an archive. You’re not from another time. You’re here, now.”

Sadhguru’s message – Engineer yourself to Liberation

When Marcus asks Sadhguru for a “final message”, this is what he had to say: “A whole lot of people are soaked in a certain level of defeatism, resentment and anger. This should go. You must come out of this strong and well because you are the original people of this land; there is a value for that and there is millennia of culture.” He says he would like to offer tools for people to evolve to a different place of consciousness from their current state of pain.

“As part of this, I’m announcing now that we have what is called Inner Engineering Online program. For anybody who is indigenous – we won’t check your blood – we will give 75% discount,” he announces and gets a double thumbs-up from Taboo. “The 25% we’re charging just to get commitment, so that they don’t take it too easy.” Sadhguru says the self-learning modules will help one “(engineer) yourself in such a way that your mind, your body, your thought, your emotion is not an impediment in your life. Your body and mind should work for you. Unfortunately, for most people, their mind works against them. To release them from this, I want Native American people to go through this. All the youth must go through this because they are the future. They must be able to present this culture in a very proud (way) but in a way that it merges with everything else in the world. Sitting separately is not going to help. Mahatma Gandhi said we must open the windows and doors of our home where the breeze from every other culture should pass through our home but it should not blow away our home. That is what I would say to the indigenous people.”