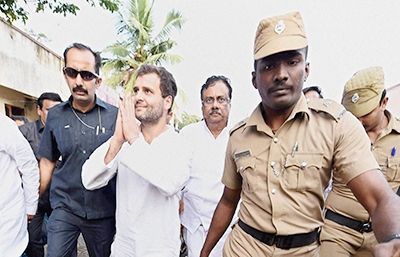 Chennai : Congress vice-president Rahul Gandhi today visited rain-ravaged parts of Tamil Nadu and neighbouring Puducherry and sought speedy action to ameliorate the suffering of the people, saying politics should not be done over relief work.

The Centre and state government needs to be “much more responsive” to the suffering of the people and take action as fast as possible, he told reporters after winding up his tour. Gandhi said the people of Tamil Nadu, especially those in Chennai, were suffering.

“The state government and the national government need to respond to this and take action as fast as possible,” he said.

The Amethi MP expressed solidarity with victims of the deluge by distributing welfare assistance to them. He interacted with people at Cuddalore, Mudichur (Kancheepuram district) and Villivakkam here.

Mingling freely with the people, he consoled a wailing woman at Cuddalore who hugged him and explained her misery caused by the monsoon fury.

At Mudichur, he posed for pictures with an elderly flood-hit woman, shook hands with beneficiaries and also lifted a girl.

Chaotic scenes were witnessed briefly when he left the venue and stopped to wave at the residents waiting for him on the road.