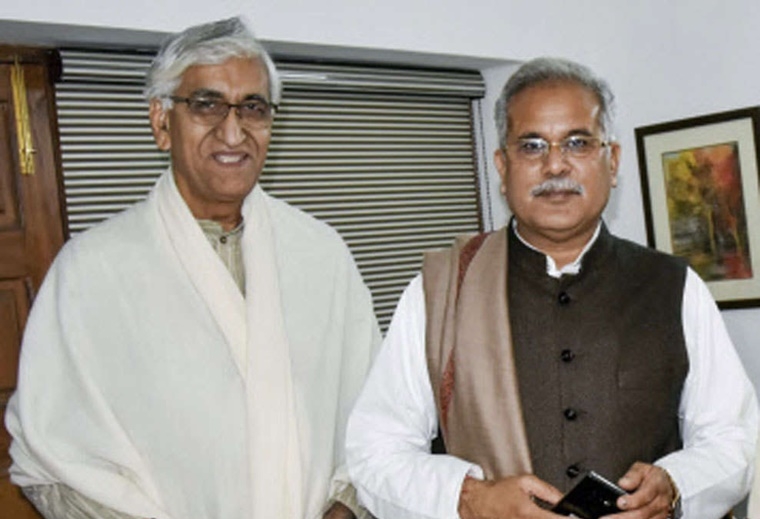 Baghel and Deo met Rahul Gandhi at his residence in Delhi on Tuesday. The meeting of these two leaders with Rahul Gandhi came amid Deo's reported claims for the top post in the state, demanding rotational chief ministership.

Both Baghel and Deo met with Rahul Gandhi as the infighting in Chhatisgarh Congress threatens to boil over. According to party leaders, the two state leaders will also meet Chhattisgarh in-charge P.L. Punia and others.

Though Congress never talked about the two-and-a-half-year formula in Chhattisgarh, the supporters of TS Singh Deo kept claiming that he was promised to be the Chief Minister of Chhattisgarh in the last two and a half years of the regime of the present government. The meeting of Baghel and Deo with Rahul Gandhi will end the suspense about whether there will be a change of leadership in the state or not.

Talking to reporters at the Swami Vivekanand airport before taking off for Delhi, Baghel did not divulge the agenda for the meetings in Delhi.

"After a long time, I am going to Delhi. (Last month) I visited Himachal Pradesh to take part in the funeral of Virbhadra Singh ji as a representative of Sonia Gandhi during which I met Priyanka (returning to Delhi). This time the meeting is with Rahul Gandhi. There will also be a meeting with AICC General Secretary KC Venugopal and state's incharge PL Punia," Baghel replied when queried about the purpose of his visit.

When asked whether Singh Deo will also be present during the meeting with Gandhi, he said, "I have information of meeting with Rahul ji only." When contacted and asked whether he will be meeting senior party leaders in Delhi, Singh Deo told PTI over the phone that he was not aware of it as of now and state's incharge PL Punia will convey to him about it.

"We don't know. Punia ji is the person entrusted with this. He is in touch with the high command. It's for him to convey. We are waiting for his message.I have informed Punia ji that I am in Delhi and I suppose we will get conveyed in the morning (about a meeting)," he said.

Earlier in the last month, senior tribal MLA Brihaspati Singh alleged that Deo orchestrated an attack on him which sparked controversy. Deo had walked out of the state Assembly and said he will not be part of the session of the House until the government orders an inquiry into the allegations against him.

But PL Punia failed to persuade TS Singh Deo, who has been upset for not probing Brihaspati for levelling allegations against him.

Meanwhile, Baghel has rejected the talk of rotating CM after two and a half years. It is clear that he is not in the mood to leave the chair. However, after meeting Congress interim President Sonia Gandhi a few weeks ago, it was definitely told Baghel that he will have to do what the high command decides. Now the matter has come to Rahul Gandhi.

Bhupesh Baghel has maintained good relations and image in front of the party's high command, while Deo has also being asked to handle party affairs at the national level on many occasions. Recently, Singh Deo was sent to Tripura as a senior observer of AICC to take stock of the political developments in the state.

Since December 2018, Baghel has grabbed everyone's attention with his work. Baghel's identity has been made as a struggling OBC leader and he is among the youth leaders of Congress.

TS Singh Deo is a senior leader and belongs to a royal family but his image is that of a good honest leader.

The alleged "promise" of being made CM for two and a half years also goes in his favour. For this reason, there is talk of a change of guard.

The Baghel government completed two-and-a-half years in power in July this year and speculations are rife that the power-sharing formula is likely to be discussed during the CM's meetings with senior party leaders scheduled on Tuesday.

Sharing the CM's post on a rotational basis has been a buzz in the state's political circles after Congress came to power in December 2018. At that time, Baghel and his two senior cabinet colleagues TS Singh Deo and Tamradhwaj Sahu were the leading contenders for the CM post.

When Baghel took oath as Chief Minister on December 17, 2018, Deo and Sahu were sworn in as cabinet ministers. As per speculations, a consensus was reached for the CM's post based on a two-and-a-half-year power-sharing formula between Baghel and Deo.

Whenever asked about the power-sharing formula, the chief minister had replied that he would vacate the post if the party high-command wants him to.