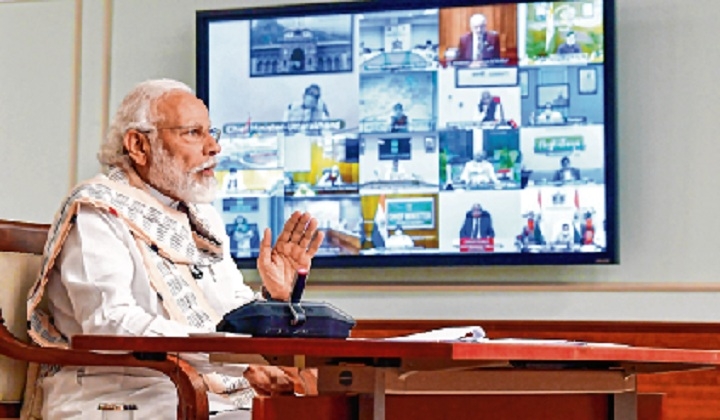 New Delhi: PM Modi on Tuesday called for focus on both life and livelihood by boosting the health infrastructure with emphasis on more testing and tracing of coronavirus cases and at the same time increase the economic activities, keeping in view both current needs and future requirements.

In his video talks with the chief ministers and administrators of 21 states and UTs in the sixth round of discussions, he laid stress on continuously keep driving the fact danger of the virus is not over yet and the need to remain vigilant while opening up the economy. Home Minister Amit Shah, who also joined the talks, said though India so far fought a successful battle against the pandemic, the road to recovery ahead is long and suggestions given by the PM on use of mask/face cover, maintaining 2 yards distance should be followed by all.

The PM steered clear of any further lockout, stressing the last two weeks of Unlock 1.0 gave “a big lesson if we keep following the rules, keeping all the guidelines, then Corona crisis will cause least harm to India.”

“By now almost all the offices have been opened, even in the private sector, people have started going to office, in the markets, the streets are getting crowded, then all these measures will help to prevent the corona from spreading fast. The slightest carelessness, laxity, lack of discipline will weaken all of our fight against Corona,” he warned.

He said: “We always have to keep in mind that the more we can stop Corona, the more it will stop growing, the more our economy will open, our offices will open, markets will open, transport will open, and so will new employment opportunities."

The PMO press release is silent on what the chief ministers said except that they gave the PM feedback on existing health infrastructure in their states and efforts for augmentation to tackle the impact of the virus as also the awareness campaigns run by them, help provided to the migrant workers in returning home and kickstarting the economic activities in the states.

The states chosen by the PM in the first round of discussions were those that had the least cases of the coronavirus — just 19,144 and less than 150 deaths, reserving the second round on Wednesday for 15 states that have high incidence of the infection crossing 3 lakh and which include Delhi, Maharashtra, Gujarat, Rajasthan, Tamil Nadu, West Bengal, Madhya Pradesh, Karnataka, Andhra Pradesh, Haryana and J&K.

The PM noted of the total cases, two-thirds are in five states, with an overwhelming proportion of cases in big cities, and they form the group with which he would be interacting on Wednesday.

He was happy to inform the low-intensity infection states, “we have tried to save each and every life as the recovery rate in the country is now over 50% and India is among the countries with the least deaths due to the dreaded virus.” He gave credit to the timely decisions taken to combat the pandemic to contain its spread in the country. “When we look back, people will remember we have presented an example for cooperative federalism to the world,” he said and stressed for the safety of self, family and community, no one should even think about venturing outside house without mask or face cover.

The PM was also happy to underline that due to recent efforts, several green shoots in the economy are now visible which are encouraging to forge ahead like rise in power consumption which was earlier falling, fertiliser sale in May this year seeing a significant increase, a healthy increase in Kharif sowing in comparison to last year, production of two wheelers increasing, digital payment in retail reaching pre lockdown level, increase in toll collection in May and bouncing back of exports.

He mentioned the importance of working together on value chains to give a fillip to trade and industry. Specific economic activity points in the states should work 24 hours a day and loading and unloading should be quickened to give further boost to economic activity, he said.