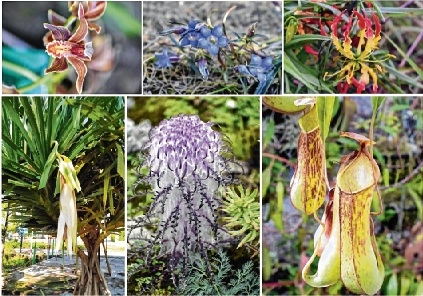 Uttarakhand Forest dept releases a report on various plant species conserved by it, including 73 rare, threatened and endangered plant species and 54 plant species that are endemic to Uttarakhand and Indian Himalayan Region on World Environment Day. | —ANI

New Delhi: BJP chief JP Nadda on Saturday chaired a key meeting of the party’s general secretaries to take stock of the relief work done by party workers amid the second Covid surge, sources said. The meet was the first in-person huddle of the BJP national office bearers held after the outbreak of the second wave. The meeting at Nadda’s residence was also attended by all BJP morcha presidents. Later, Nadda, along with BJP general secretary BL Santhosh met PM Modi apparently to apprise him of the relief work done by the party.

Hitting out at the Congress-led government in Punjab, Union minister Hardeep Singh Puri alleged on Saturday Covid vaccines supposed to be given for free to the beneficiaries were being sold at a higher price in Punjab to make profit. In a virtual press conference, Puri said, “On May 29, Vikash Garg, the IAS officer in-charge of the Covid vaccination programme in Punjab, said 4.29 lakh doses of Covishield were purchased for Rs13.25 crore at an average rate of Rs309 per dose, but it was sold to private hospitals for Rs1,000 apiece.” He said the Congress-led Punjab government had purcha­sed 14,190 doses of Covaxin for Rs4.70 crore at Rs412 per dose.

The Gujarat government observed state mourning on Saturday as a mark of respect to former Mauritius President Anerood Jugnauth, who died on Thursday. In honour of Padma Vibhushan Shri Jugnauthji, a daylong state mourning was declared across India. Gujarat also observed a 1-day state mourning. The national flag was hoisted at half-mast in the state during the day, and no official entertainment programmes were held during this period, the government said.

A man, 39, who shared a live video of harming himself on Facebook was saved by the swift intervention of Delhi Police after it was alerted by a call from an office of the social media giant thousands of kilometres away in the US, officials said on Saturday. On Thursday night, Shohan Lal (name changed), a Dwarka resident, inflicted multiple deep cuts on his hand following an altercation with neighbours. Lal works at a sweet shop and has 2 young children. He has been emoti­onally vulnerable since the death of his wife in 2016. The altercation with neighbours triggered him to take the extreme step. While doing so, he live-streamed it on Facebook, a senior police officer said. While all this was happening, at 12.50 am, DCP CyPAD Anyesh Roy received a call alert from Facebook’s US office about a suspicious self-harm live video being posted by a male Facebook user located in Delhi.

A 28-year-old man died in Umaria district of Madhya Pradesh after a power bank-like device he found on a road exploded when he connected his mobile phone to it for charging, police said on Saturday. The incident occurred at Chaprod village on Friday, police said, adding whether it was a power bank or any other electronic device is being confirmed. “The deceased, Ram Sahil Pal, found the device lying on a road while he was going to his farm on Friday," Sub Divisional Officer of Police Bharti Jat said. After returning home later, Pal plugged his mobile into the device at his neighbour's place. However, it exploded and he died on the spot, according to the statements of the local residents.

A suspected cattle smuggler was killed and his 6 accomplices were injured when their mini-truck carrying cows was stopped as it was passing through a village in UP’s Mathura district, provoking them to first fire at villagers and then get attacked in return, police said on Saturday. The incident took place in Tumaula village in the early hours of Friday. The occupants of the vehicle, however, opened fire at villagers to drive away, but hearing the gunshots, more people joined the villagers and attacked the alleged cattle smugglers, killing 1 of them and grievously injuring 6 others.

Rajasthan Police on Saturday arrested 4 accused for sexually assaulting 2 sisters aged 19 and 20 after beating them up severely in Jaipur. Police confirmed the sisters, residing in a Jaipur apart­ment, were taken to a house in Luniawas on June 1 by 2 of the 4 accused. At the Luniawas house, the youths, along with 2 of their associates, allegedly thrashed and gangraped the girls. The accused, Atal and Pankaj, even threatened them against disclosing the incident to anyone.

Man killed for glass of water

A physically challenged person was killed in Bihar’s Begusarai district just for a glass of water. The deceased, Chote Lal Sahani, 50, a native of Badepura village, died during treatment in Patna medical college. The incident happened on Friday when Chote Lal Sahani went to a nearby pond in the village for fishing. While returning home, being thirsty, he took a glass of water from a water pot of Dinesh Sahani, who, along with his son, beat him up badly.