Most places in India are prone to disasters: Rijiju 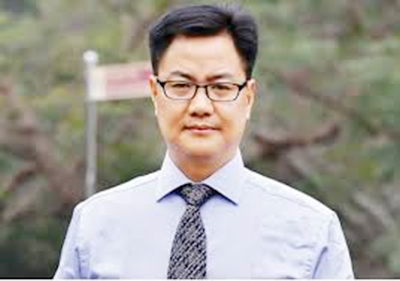 New Delhi  : Most of the places in India are prone to disasters and the government is taking scientific approach to deal with any calamity, Minister of State for Home Kiren Rijiju said on Monday.

“India is prone to all types of disasters and most of places are prone to disasters,” Rijiju said and requested all state governments and stakeholders to be ready to face the disasters.

Addressing the 11th formation day of the National Disaster Management Authority (NDMA), he said the Central government is positive in putting efforts in disaster management in the country. Now the Centre is putting 100 per cent efforts for disaster mitigation and has left no stone unturned to address all disaster related issues, he said.         Rijiju said disaster mitigation should be looked from the scientific point of view and the approach should also be scientific to deal with it, reports PTI. The minister said there are natural disasters and man-made disasters and everyone has to be prepared to tackle them. Rijiju also said each state government must have its own disaster response force of their own. He said India is going to organise first Asian Ministerial meet on disaster management and Indian disaster response forces have gone beyond the boundaries to tackle disasters as they have no boundaries. “We have gone a long way in disaster management but still to cover a lot,” he said. A training manual on how to conduct emergency management exercise (EMEx) was released by the Minister on this occasion.

This training manual has been prepared on the basis of experiences gained from several emergency management exercises conducted by NDMA. Rijiju also released the first edition of NDMA’s quarterly newsletter ‘SAMVAD’ as a channel of communication and a platform for dialogue amongst the various stakeholders involved in the cause of disaster risk reduction.