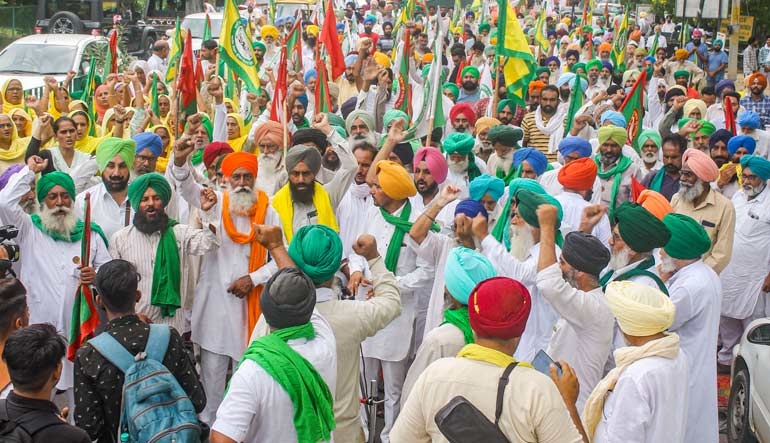 The Socialist Party (India) on Friday claimed some members of its farmers' wing were detained by police after they gathered here to burn effigies of Prime Minister Narendra Modi, Union Home Minister Amit Shah and MoS Home Ajay Mishra in the wake of the Lakhimpur Kheri violence.

The members of the Socialist Kisan Sabha also carried placards demanding the resignation of Mishra, whose son Ashish is alleged to have been in one of the cars that ploughed into farmers in Uttar Pradesh's Lakhimpur Kheri on October 3, leaving four of them dead.

The Socialist Kisan Sabha is a constituent of the Samyukt Kisan Morcha (SKM), an umbrella body of over 40 farmer unions that is spearheading the stir against the Centre's three agri laws.

Last week, the SKM had called on all its constituents to burn effigies of Modi, Shah, Uttar Pradesh Chief Minister Yogi Adityanath and others on the occasion of Dussehra on October 15.

General secretary of Socialist Party (India) Sandeep Pandey, who was also part of the gathering, told PTI, "We were not allowed to burn the effigies. The effigies were taken away from us along with the placards. We had reached the Shaheed Smarak, and as soon as we started climbing the stairs, we were stopped by the police." Pandey said he and six workers of the Socialist Kisan Sabha were detained by the police.

In a statement issued here earlier, the Socialist Kisan Sabha said, "On the call given by the Samyukt Kisan Morcha, effigies of Narendra Modi, Amit Shah and Ajay Mishra will be burnt on October 15, Friday, Dusshera day, at 2 pm at Shaheed Smarak, Lucknow to demand the resignation of Union Minister Ajay Mishra 'Teni' for the violence in Lakhimpur Kheri.

Besides the four farmers, a journalist and three BJP workers were killed in the Lakhimpur Kheri violence.

MoS Home Mishra's son Ashish and five other people had been arrested in the case till Wednesday evening.