Bhikaji Rustom Cama is marking her 160th Birth Anniversary on 24th September, 2021.Here are some rare and lesser known facts about the legend.

Bikaji Rustom Cama was a renowned Indian activist. She was born on 24th September 1861 in Bombay to a Zoroastrian family. Her father Sorabji Framji Patel and Jaijibai Sorabji Patel, were well known personalities. Her father was also an influential member of the Parsi community.

She is the co-founder of the Parsi Indian Society. She was also one of the initial females to talk about gender equality.

Bhikaji Rustom was amongst the most prominent personalities of the Indian Independence movement. Her humble heart and kind gestures impressed many people. The urge to do good and rightful deeds for the needy was her first priority. She reflected the quality of being diligent since childhood. Which was visible enough in all what she was indulged in.

Bhikaji Rustom Cama is marking her 160th Birth Anniversary on 24th September, 2021. Here are some rare and lesser known facts about the legend.

1. Bhikaji Rusrtom is a highly respected entity and was famously known as Madam Cama. Several Indian cities have streets and places are named after Bhikhaiji Cama, or as Madame Cama.

2. Bhikhaiji completed her studies at Alexandra Girls' English Institution like many other Parsi girls.

3. She married Rustom Cama , the son of K. R. Cama on 3 August 1885. Her husband was a wealthy, pro-British lawyer who aspired to enter politics. Unfortunately the marriage was not a happy one.

4. Bhikhaiji made herself busy in philanthropic activities and social work. She was happy spending her time doing good for others.

5. Bhikhaiji joined the team working at Grant Medical College, in October 1896 in an effort to provide care for the bubonic plague afflicted. In the journey, Madam Cama suffered the plague herself but survived.

6. Bhikaji met Dadabhai Naoroji, then president of the British Committee of the Indian National Congress. For whom she worked as a private secretary. Cama supported the founding of Varma's Indian Home Rule Society with Naoroji and Singh Rewabhai Rana, in February 1905.

7.In London, she was told that her return to India would be prevented unless she would sign a statement promising not to participate in nationalist activities. As usual standing firm at her words, she refused the condition.

8. Cama wrote and distributed revolutionary literature for the movement, including Bande Mataram and later Madan's Talwar. 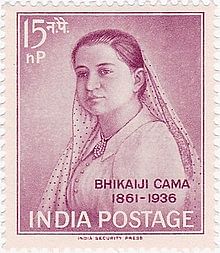 9. The Indian Posts and Telegraphs Department issued a commemorative stamp in her honor on 26 January 1962, India's 11th Republic Day.

10. Madame Cama suffered a stroke which led to paralyzes and other major illness. Accompanied by Sir Cowasji Jehangir, she finally arrived in Bombay in November 1935. She died only after nine months at the age of 74, in a Parsi General Hospital on 13 August 1936.