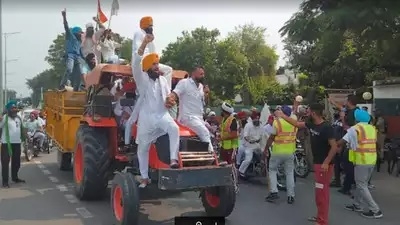 In the face of vociferous protests by farmers, the Centre has reversed its decision and said that procurement of paddy would commence from Sunday.

The Kharif procurement generally begins on October 1 every year but this time the Centre had postponed the procurement in Punjab and Haryana till October 11 as the crop is yet to mature and moisture content is beyond permissible limits, owing to recent rain.

The Centre’s decision to delay the procurement had become yet another sticking point and protests erupted in the two northern states with farmers laying siege to houses of MLAs and ministers. The authorities, in turn, used barricades and water cannons to ward off the protestors. However, with the Centre relenting on the procurement, the protests have subsided.

On Friday, the new Punjab Chief Minister Charanjit Channi had met Prime Minister Narendra Modi in Delhi and asked the Centre to expedite purchase of paddy and millet.

The Centre finally relented after there were massive protests outside the residence of Haryana CM Manohar Lal Khattar. Subsequently, there was a meeting between CM Khattar and Ashwini Choubey, the Union Minister of State for Food. An announcement followed which said paddy and millet procurement in Haryana and Punjab will now start on Sunday "in the interests of the farmers".

NDTV footage from Haryana showed farmers, who were briefly doused with water cannons, standing on a pile of yellow police barricades and shouting angrily, while a handful of security forces in riot gear look on.

"We will take the paddy produced by us to the residence of the Chief Minister because he had said we can sell our produce anywhere as per the new law. Thus, we plan to sell it today in front of his house," Jagdeep Singh Aulakh, a farmer union leader, was quoted by news agency ANI.

On Friday, farmer leader Rakesh Tikait had warned of protests. The Congress (in the opposition in Haryana and in power in Punjab) had warned the Centre that a large amount of paddy would go waste if not procured soon. "Lakhs of quintals of paddy had already started to arrive in mandis from September 20. Eleven days have passed since then but so far not a single grain has been procured (at MSP) in Haryana," Congress leader Randeep Singh Surjewala was quoted by news agency PTI.