Bagalkot: Education Department officials closed St. Paul higher primary School in Ilkal near Hungund in Bagalkot district on the charge of ‘trying to convert students and their parents’.

According to reports, the Block Education Officer in Karnataka’s Bagalkot district ordered the closure on December 30 following a visit to the school and a complaint by some right-wing organisations.

He said that the school was being closed indefinitely for ‘celebrating Christmas in violation of rules’. However, he did not cite the rules in the order. “You have served meat in the classrooms during Christmas celebrations on December 25. This has led to embarrassment to the public and the department. You have to keep the school closed till further orders. Legal action will be taken if you reopen the school without permission,” he said.

The order was later revoked when it was brought to the notice of the education department.

Earlier, right-wing groups had staged protests and alleged that the school was converting children to Christianity and brainwashing them to believe in the Bible.

“We are not converting anyone. First of all, the school is not run by Christian missionaries. It is run by some residents of Ilkal. The school is run in a rented premises. The school committee includes members of all faiths. The school has students of all religions. The lunch was not held in the school,” school management committee members Jackson D Marck told a journalist. 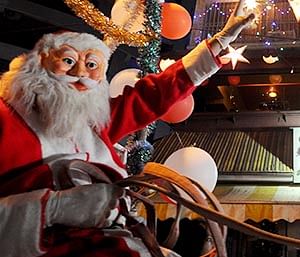