In 2018, when New Zealand Prime Minister Jacinda Ardern attended the United Nation general assembly meeting with her baby in tow, she made history as the first world leader to attend an official event with a baby. Ardern appeared with her three-month-old daughter at the UN and played with her before giving a speech at the Nelson Mandela peace summit.

Ardern’s act was hailed by women, men, and critics across quarters for raising a child while continuing as Prime Minister.

Cut to 2022, back home in India, on Friday, Pathanamthitta district collector Divya S Iyer brought her son to the valedictory ceremony of a private film festival and delivered the speech with her three-and-a-half-year-old child in her arms. 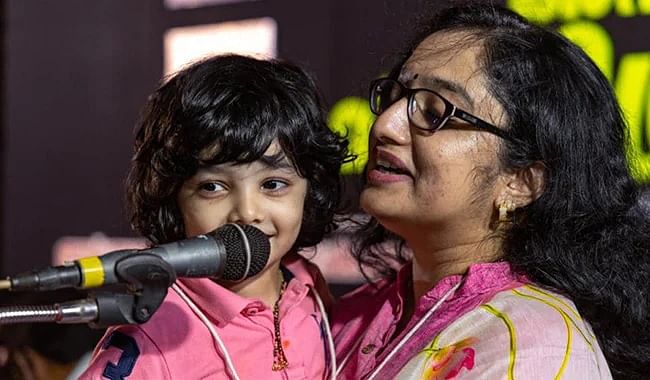 The video, which sees Ms Iyer sitting with her child on the dais, cuddling him, and later affectionately talking to him while standing up to deliver her speech triggered controversy. Many have come to criticise the collector saying the act was improper for a high-ranking officer. On the other hand, some, including her husband, have supported Ms Iyer highlighting the multiple roles women play and their right to have their moments with their children.

While the world after Ms Ardern hoped that one day this will be the norm for all women who wanted to balance a career and parenting while multitasking, the instance still raises questions if a woman who is also a mother is even allowed to hold her baby in arms or if she can even bring her child to work place.

Defending Ms Iyer, her husband KS Sabarinadhan, former legislator and Youth Congress state vice-president highlighted a strong and much-discussed point that, this is not the issue of one Divya Iyer alone but of the majority of working women who stand firm on their feet by overcoming several hurdles and difficulties.

Payal Bisht, a senior banker and a mother of a two-year-old son, still struggles to prove herself at work. “I took maternity leave and when I joined back my HR still told me to focus on the child rather than joining the work back. I was told that I can’t manage two things. I still don’t understand why they would tell me about how I would raise my child,” says Payal and adds that she went back to work after her son turned one.

“I have been working for the organisation for eight years and I have proved myself but I still struggle to be with my child and prove that I am capable of handling both work and my son’s childhood,” she adds. “Being a working woman is filled with regrets and stress.”

On the other hand, Shilpee Surana, a Chartered Accountant in a corporate firm and a mother of an eighteen-month-old daughter says that a woman is expected to sacrifice her career because she is a mother. “I live in a joint family so when I went back to work post my maternity leave, there wasn’t any challenge. But in a few months, we realised others can’t take care of the baby when a mother is needed. I get support from my workplace but I sometimes wish I could spend some more time with my daughter. Being a mother doesn’t mean you sacrifice your career. There have been instances when I wanted to spend more time with my kid but I had to attend an official assignment. It is tough for working women. There are many instances when women sacrifice their careers,” says Shilpee.

Child at the workplace is a distraction

Half of the criticism would indeed be over if we learn how difficulties are being overcome by women, who decide to play multiple roles as wives, mothers, and also handling professional duties.

“But there’s no need for any sympathy, only a positive workspace is enough,” said Nurpur Sinha, a marketing professional and a mother of a three-year-old son. “I appreciate the organisations which have in-house crèche for babies. It’s like providing an environment where kids grow up with their mothers. This way mothers will be able to focus more on their work because they know the child is around,” opined Shilpee.

Child Psychologist Nirali Bhatia explained that mothers are more at peace when they carry their baby with them. “A mother has more peace of mind when she carries a baby with her because she knows she is the in-charge and everything is under control. The child needs a safe environment to grow and when he is with mother he is safe, unless the environment at work is not child friendly. For instance, women contract laborers who carry their babies at construction sites, where only the mother’s body fragrance and her heart beat is the secure environment. The kid can’t be kept away because there’s a lot of noise so the kid can’t sleep,” said the psychologist and added that kids who grow up seeing mothers working are more independent and considerate about multiple roles their mothers play. “We haven’t come across any negative impact on a mother or a child when she takes the kid to work, rather there are positive impacts. Having the mother around is fulfilling for the child.”

But isn’t it a distraction for others and the mother when the child is around during working hours? “Indeed it is. But when a mother needs to be with the child she needs to be there. And organisations need to understand these basic needs. I agree that bringing the child to the workplace may not be acceptable in many organisations but they need to be considerate of working mothers. In India, if a mother brings a child to the workplace she is perceived as non-serious. People in India are not mature enough to understand that she knows her job well and the baby won’t be a distraction for her,” Nupur said.

Problem lies with society and not with a woman

“If we as society start understanding equal roles of parents we may be more open to having more open space for children and mothers to grow. We are still a hypocritical society which cannot see a woman doing multiple roles while we expect the same from every woman. Sadly, Indian society is still not prepared to see a woman carrying a baby at a public event. The underlying problem is with society and mindset. First they are not ready to see a woman as a chief guest and when she has a child they think she has more sympathy and she isn’t worth it,” Nirali shared.

Alpes Panchal, Consultant Psychiatrist is of the opinion that there may be focus issues for mothers taking the child at work. “There may be mental and physical exhaustion for the mother when the baby is around at work. For the child, there might be increased anxiety due to the hostile environment, and the workplace isn’t the friendliest for the child. So, it becomes the parent’s prerogative to make the child comfortable. And for that they need to take time out of work, instead of burdening their colleague. A great method is to put the child to some small work in stationary if they’re able to follow simple instructions,” said Alpes and added that there are studies which suggest behavioural disturbances are found in children whose mothers often take them to the workplace. “I personally feel, if it’s an unavoidable circumstance, you have to take the child to the workplace. But if it becomes a common practice, it might have long term anxiety problems with the children,” the psychiatrist added.