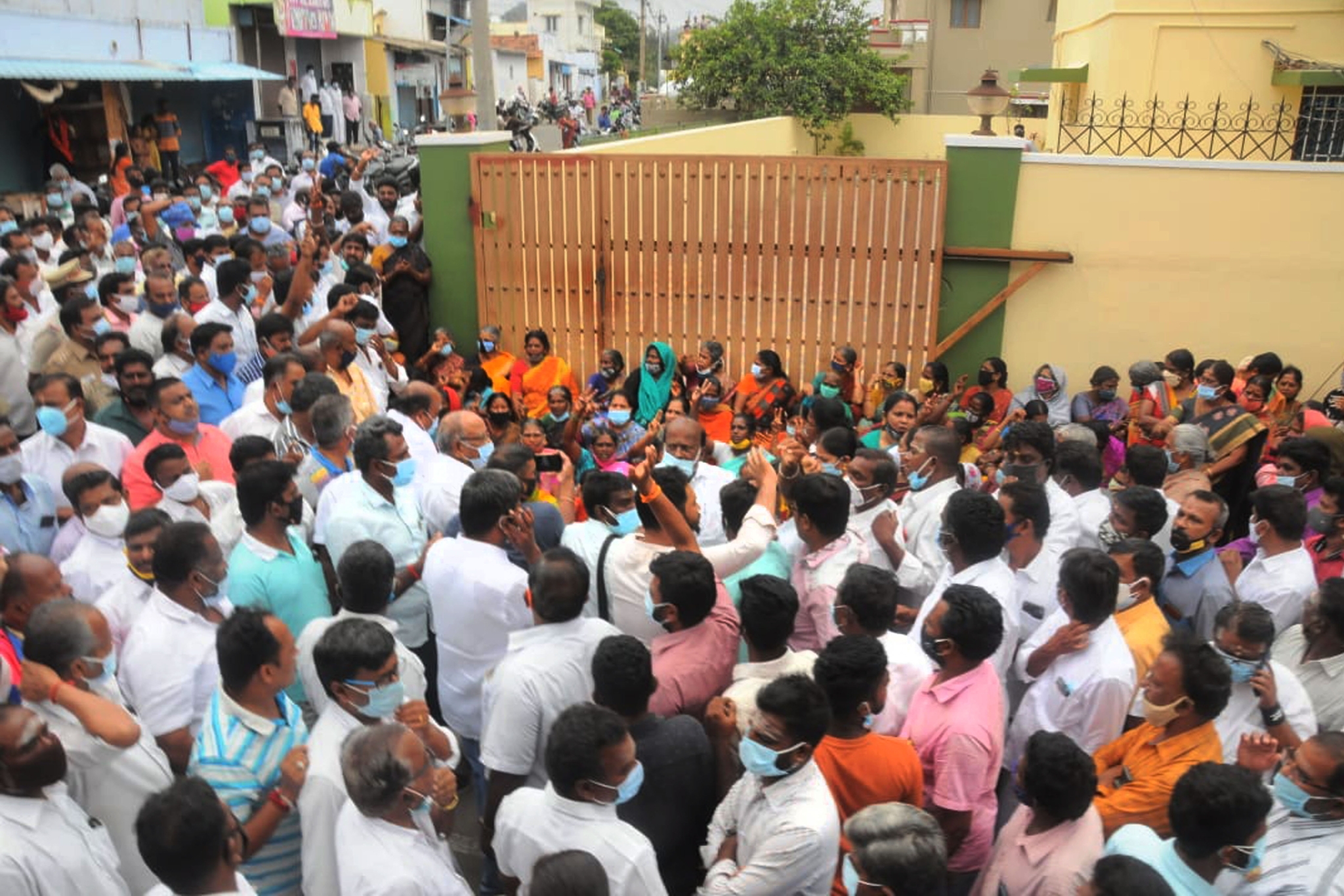 Coimbatore: AIADMK party members block the road and demanding the officials of Diroctorate of Vigilance and Anti Corruption (DVAC) to return back from the party MLA SP Velumanis house, at Sugunapuram, Kuniyamuthur in Coimbatore, Tuesday, Aug 10, 2021. | (PTI Photo)

Chennai: Sleuths of the Directorate of Vigilance and Anti Corruption (DVAC) conducted simultaneous searches at over 50 places including the houses and business premises of former Tamil Nadu Municipal Administration and Water Supplies Minister SP Velumani, his relatives and associates in Chennai, Coimbatore and Kancheepuram districts.

Velumani, who hails from Coimbatore, was one of two most influential ministers in the erstwhile AIADMK regime and a close lieutenant of former Chief Minister Edappadi K Palaniswami. He along with Thangamani, former Electricity Minister, were considered to have been the link between New Delhi and Tamil Nadu in the post-Jayalalithaa period, which has been politically tumultuous for the AIADMK. He served as Minister from 2011 (Jayalalithaa Cabinet) to May 2021.

Over the past few years serious charges of massive corruption in the award of contacts for various development works undertaken by local bodies were levelled against him by anti-corruption activists and the DMK, which while in opposition had sought a probe against him. It was alleged that Velumani awarded contracts to select firms by manipulating the online bidding process through fictitious firms. He allegedly exploited the fact that there was no elected urban local bodies during the past five years and used officials with dubious credentials to play along. Much of the corruption had occurred in the Greater Chennai Corporation and Coimbatore Corporation.

Soon after the searches began, hundreds of AIADMK cadres and local MLAs in Coimbatore, where the AIADMK made a clean sweep in all 10 Assembly constituencies, thronged outside Velumani’s house. The AIADMK leadership issued a statement condemning the raids as vindictive. Recently, the DVAC had conducted searches at the premises of former AIADMK Transport Minister M R Vijayabaskar.

Sources said that the DVAC found documents indicating exponential growth in the revenue of companies linked to Velumani. "The turnover of one of the firms under probe KCP Engineering had grown from ₹ 42 crore in 2012-13 to ₹ 454 crore in 2018-19," a source said.

Another form C R Constructions saw a leap in business from just ₹ 38 lakh to ₹ 43.5 crore during the period.

Velumani’s brother S P Anbarasan also came under the lens. Another accused Chandraprakash complained of illness and was admitted to a private hospital.