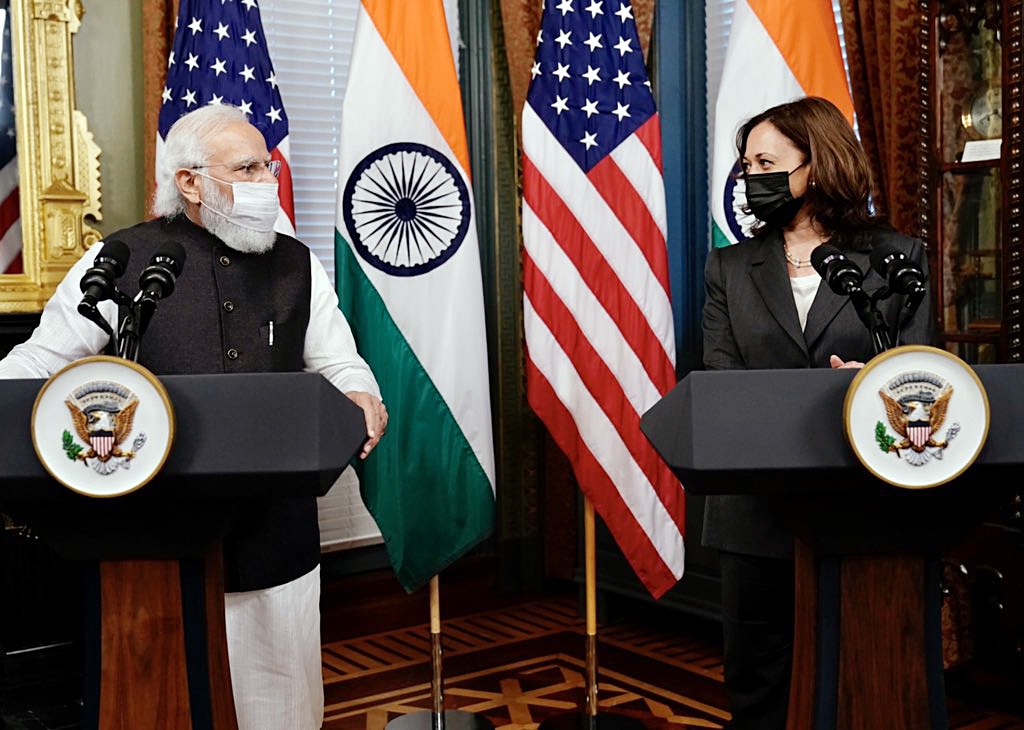 Voicing concern over the threat to democracies around the world, Vice President Kamala Harris has underscored the need to defend democratic principles and institutions in both India and the US.

Harris made the remarks on Thursday in a joint media appearance with Prime Minister Narendra Modi before their first in-person meeting at the White House during which they decided to further cement the Indo-US strategic partnership and discussed global issues of common interest, including Afghanistan and the Indo-Pacific.

"As democracies around the world are under threat, it is imperative that we defend democratic principles and institutions within our respective countries and around the world," Harris told Prime Minister Modi.

Her remarks came as she welcomed Modi to her ceremonial office.

"I know from personal experience and from my family of the commitment of the Indian people to democracy, and the work that needs to be done (so that) we can begin to imagine, and then actually achieve our vision for democratic principles and institutions," said 56-year-old Harris, whose mother - Shyamala Gopalan - was a cancer researcher and civil rights activist from Chennai.

According to The Economist Intelligence Unit in February, India slipped two places to 53rd position in the 2020 Democracy Index's global ranking. However, India is ranked higher than most of its neighbouring countries.

Meanwhile, US Vice President Kamala Harris has told Prime Minister Narendra Modi that she was asking Pakistan to act on terrorism and ensure that terror groups do not target New Delhi or Washington, according to India's Foreign Secretary Harsh Vardhan Shringla.

He said that when the issues of terrorism came up during their meeting on Thursday, "the Vice President suo motu referred to Pakistan's role in that regard. She said that they were terror groups that were working there. She asked Pakistan to take action so that these groups do not impact on US security and that of India".

Shringla asserted that "she agreed with the Prime Minister's briefing on the fact of cross border terrorism, and the fact that India had been a victim of terrorism for several decades now, and on the need to rein in and closely monitor Pakistan's support for such terrorism".

The White House's account of the meeting, however, made no mention of Pakistan's role in terrorism or asking it to take action against terrorists.

The readout pointedly said: "They each emphasised a commitment to democratic values and discussed the need to strengthen democracy at home and abroad."

The Indian External Affairs Ministry's readout, in turn, did not mention any discussion of democracy.