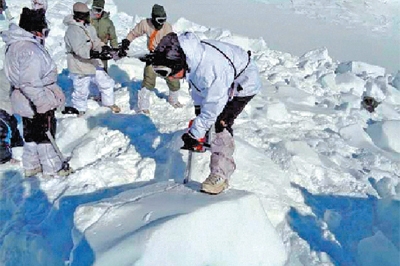 Arctic tent may have saved Lance Naik who was buried under 35-feet of snow for 6 days; currently in coma at Delhi military hospital .

New Delhi : Lance Naik Hanamanthappa Koppad, the soldier who came back from the dead – having been buried for six days under 35 feet of snow in temperatures as low as minus 40 degrees Celsius – has a billion hearts fluttering for him.

The ‘Miracle Man,’ as Koppad will be dubbed if he survives, is in coma and on ventilator support at a hospital in Delhi. The next one-to-two days are critical for the soldier, a medical bulletin said.

Koppad was trapped when a wall of ice came crashing down on his army post, killing nine of his colleagues. The Army’s painstaking search efforts yielded results and he was found on Monday in a pre-fabricated “arctic tent” that was embedded deep in ice.

In fact, a thick ice sheet as hard as concrete had to be pierced before the Lance Naik could be reached. The Army apparently had refused to give up on its men who were assumed to be dead after five days.

He was miraculously alive: conscious but drowsy with a weak pulse and disoriented. He was also severely dehydrated and in shock. “He was immediately resuscitated at the site by doctors who were stationed there in the hope of (finding) a survivor,” the army said. The ‘arctic tent,’ which is designed to withstand extreme temperatures, possibly aided his survival, Army sources added.

To remove the sheet of ice, high technology equipment, including rock drills, electric saws, and earth augers were flown in.  Deep penetration radars, capable of detecting metallic objects and heat signatures at the depth of 20 metres were put to use along with radio signal detectors.

“People have been found alive in such situations even after weeks. It depends on the medical condition and physical factors. So it is always very difficult to tell how long someone can survive buried under snow and ice,” an Army officer told IANS.

Over 150 trained and acclimatized Army troops and several special rescue dogs were pressed into action. Army officials said the dogs played a significant role in detecting the location of the soldier.  Koppad, who is from Karnataka, is being treated at the Army Research and Referral Hospital where he was flown in from Siachwn base camp and admitted earlier Tuesday. Among his first visitors were Prime Minister Narendra Modi and the Army chief. Later, Modi tweeted, ‘‘No words are enough to describe the endurance & indomitable spirit of Lance Naik Hanumanthappa. He is an outstanding soldier.“

The Siachen is perhaps the most inhospitable place on Earth: More than the enemy the soldiers fear the harsh terrain of the coldest battlefield in the world. Oxygen is scarce and the most able bodied soldiers start gasping for breath; blizzards and low visibility are the norm. It was in this terrain that the rescue team was engaged in removing large chunks of ice.

For Koppad the next 24-48 hours are critical due to the complications caused by re-warming and establishment of blood flow to the cold parts of the body. Thankfully, there were no frost bites and broken bones.