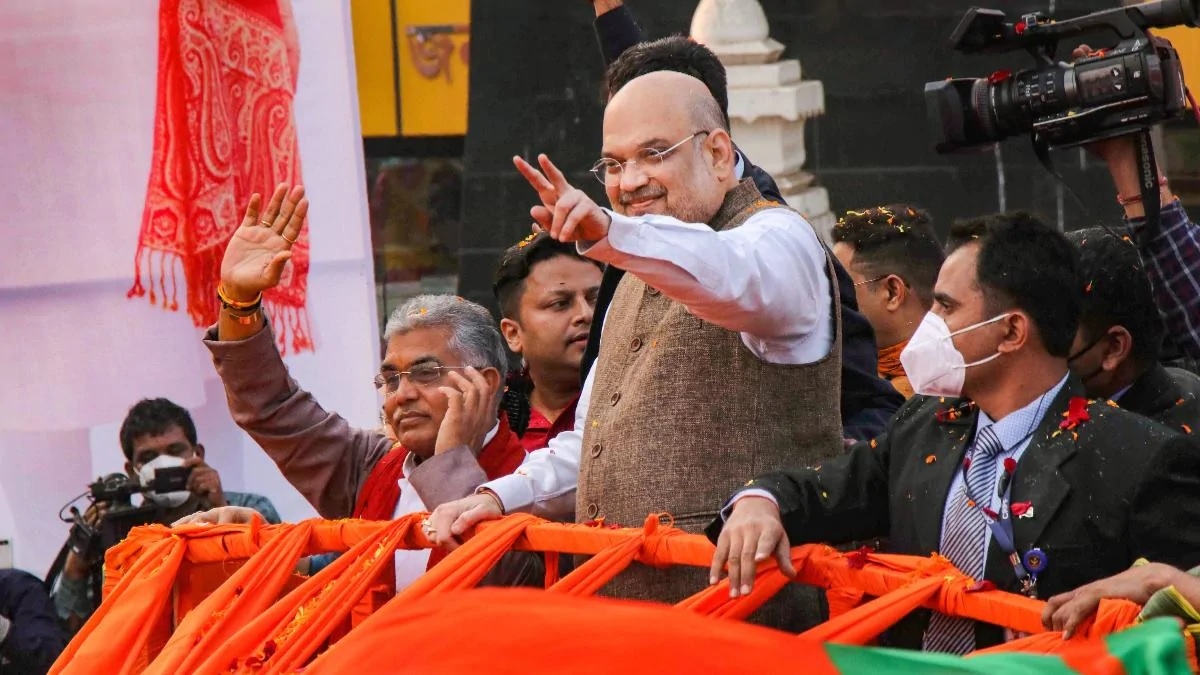 Union Home Minister Amit Shah will celebrate his 57th birthday on Friday, October 22. From joining the Rashtriya Swayamsevak Sangh (RSS) at a young age of 14 to being appointed to one of the most important positions in Prime Minister Narendra Modi's Cabinet, Shah's meteroic rise in politics is one for the ages.

Let us trace the political journey of BJP's 'Chanakya':

Born on October 22, 1964, Amit Shah's father Anilchandra Shah used to run a business dealing in PVC pipes. Amit Shah completed his schooling in Mehsana and pursued his graduation in biochemistry from CU Shah Science College in Ahmedabad. He handled his father's business for some time. He also briefly worked as a stock-broker and also with co-operative banks in Ahmedabad.

According to his website, as a young boy, he was always inspired by the stories of the great patriots of the nation and dreamt of working for the progress of the motherland. He was especially inspired and influenced by the nationalist spirit and vision of Rashtriya Swayamsevak Sangh (RSS) and became its active member in Ahmedabad.

After joining the RSS, he was a member of the Akhil Bharatiya Vidyarthi Parishad (ABVP), the student wing of the RSS, at the age of 18. It was around the same time when he met Narendra Modi for the first time in 1982. During those years, Modi was a RSS pracharak (promoter) working as the in-charge of the youth activities in Ahmedabad.

In 1986, Amit Shah became the secretary of ABVP and a year later he was associated with BJP's youth wing Bharatiya Janata Yuva Morcha (BJYM). Shah was first elected as the MLA from Gujarat's Sarkhej in 1997 (a by-election). He continued to hold the seat in the 1998, 2002 and 2007 elections until the seat's dissolution in 2008. He then got elected from the nearby Naranpura assembly seat in 2012.

When Narendra Modi was first appointed the Chief Minister of Gujarat in 2001, Amit Shah also gained political prominence in the state. After his thumping victory in 2002, Shah was given multiple ministerial portfolios including the Home Minister of the state. During this period, Shah also faced challenges as he was jailed in the Sohrabuddin Sheikh encounter case in 2010. Later, a special CBI court dismissed the case.

As Modi moved towards the Centre, Amit Shah's political career also rose to newer heights. He was first appointed the BJP's in-charge for the largest and politically most crucial state, Uttar Pradesh, during the 2014 Lok Sabha elections, and the saffron party and its allies won a whopping 73 seats out of 80.

In July 2014, he was unanimously appointed as the BJP's national president replacing veteran leader Rajnath Singh. He was re-elected to the post unanimously in January 2016. Shah was credited for election victories in Maharashtra, Haryana, Jammu & Kashmir, Jharkhand and Assam. Due to the back-to-back wins, he was hailed as BJP's Chanakya for his strategic and organisational abilities.

In 2019, PM Modi came back to power with an even bigger majority and Shah, who fought from Gandhinagar, was appointed as the Minister of Home Affairs. Later in July 2021, when PM Modi rejigged his Cabinet, Amit Shah was made the minister of the newly-formed Ministry of Cooperation

During his tenure, Shah moved the bill to scrap Article 370 in Jammu and Kashmir. He also introduced the Citizenship (Amendment) Act, 2019, and his next move as per BJP's manifesto seems to be the Uniform Civil Code (UCC).