Never before has a municipal election in any state witnessed this degree of attention and such vigorous campaigning.
Shriya Roy 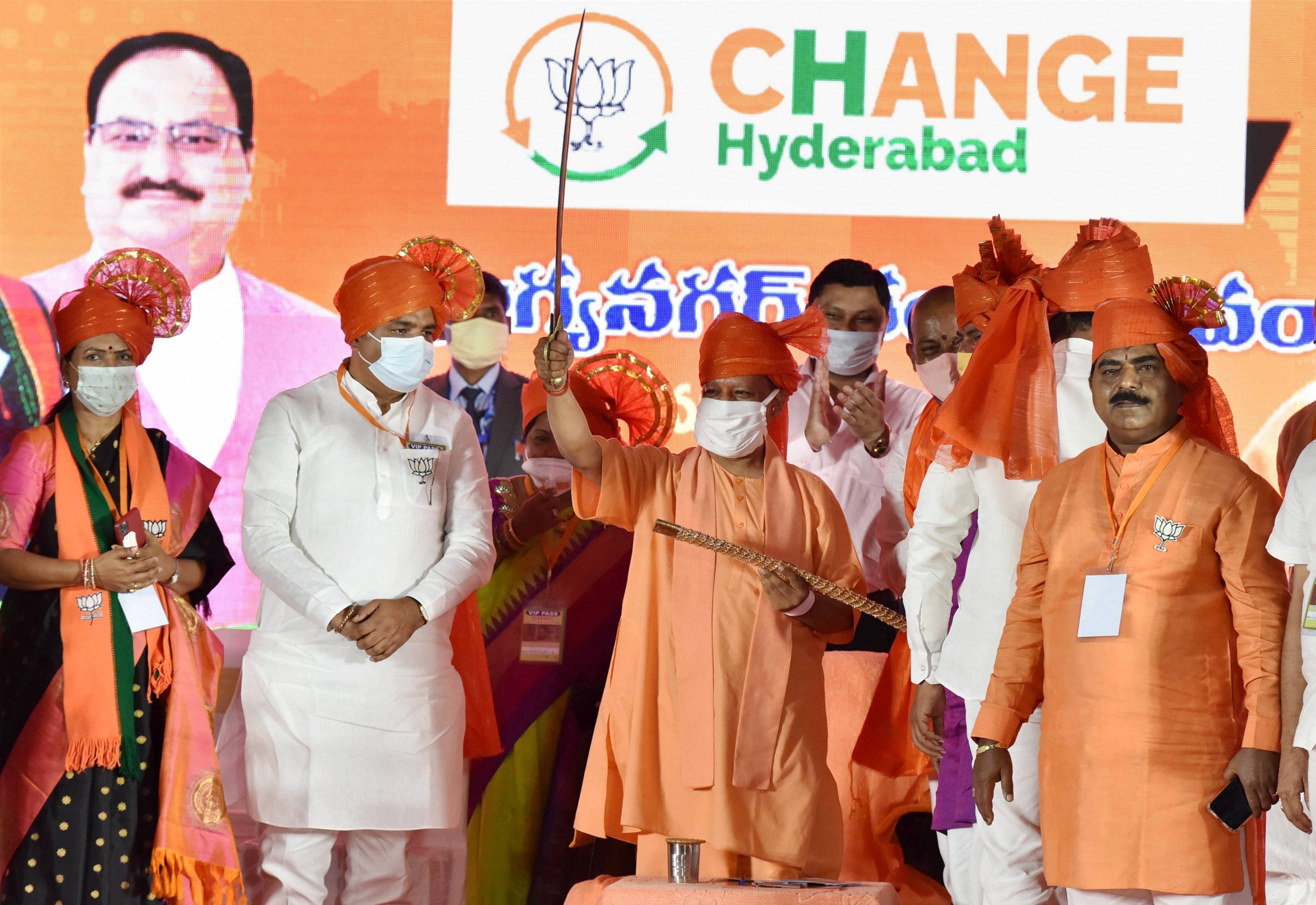 Addressing a public meeting in Hyderabad, Uttar Pradesh Chief Minister Yogi Adityanath on Friday raised the campaign pitch with his controversial speech ahead of the GHMC polls. He was, however, not the only top leader of the saffron party who turned up to campaign in the Hyderabad civic polls.

Never before has a municipal election in any state witnessed this degree of attention and such vigorous campaigning. So the question that instantly arises is what made things different this time on? Why did the BJP resort to such an aggressive campaign in the local body polls?

Firstly, this is the first time that the BJP – which holds just four seats in the outgoing civic body – has emerged as a key candidate against the ruling Telangana Rashtra Samithi (TRS) in the municipality elections. The TRS, which swept the 2016 polls, holds 99 seats out of 150. AIMIM has 44, Congress 2 and TDP 1.

However, things have massively changed since the last municipal elections. While the TRS swept away the assembly elections in the state in 2018, the party lost four crucial seats to the BJP in the Lok Sabha 2019 polls. Furthermore, more recently, BJP also tasted victory in the Dubbaka bypoll which was formerly a TRS stronghold. (https://theprint.in/politics/buoyed-by-dubbaka-bypoll-win-bjp-looks-for-bigger-role-in-telangana/546306/)

There is also a larger ideological battle at play between the BJP and the AIMIM. Analysts say that unlike previous municipal polls, the current one is being fought on non-local issues. Local development has become secondary and war of words and polarisation has become the main focus. (https://thewire.in/politics/bjp-ghmc-hyderabad-elections-campaign-expansion-telangana)

BJP has missed no opportunity to attack Owaisi and his party, and they believe that AIMIM venturing out to contest elections in other states, like Bihar, where it won 5 assembly seats, needs to be kept in check at Owaisi’s home turf.

The municipal polls also mark an opportunity for the BJP to test its strategy for the state elections. If they can raise their tally in the civic polls, it will have a major impact on their assembly poll chances. It is also a part of the party’s plan to emerge as a strong political force in the southern states.

BJP also believes that with chief minister KCR’s popularity declining and a strong anti-incumbency sentiment against the TRS, and with Congress having almost zero presence, they could emerge as a strong force, making wide inroads into the state politics. (https://www.hindustantimes.com/india-news/kcr-scared-of-anti-incumbency-factor-say-congress-bjp/story-C6Iv8VpWF6VsRjqEji1WRJ.html)