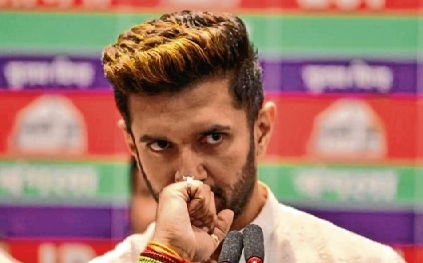 Union food and consumer affairs minister Ram Vilas Paswan's son Chirag Paswan said although he wanted to meet party workers in the run up to the Assembly elections, he could not do so because he had to be by the side of his father as he is admitted to a hospital ICU.

Lok Janshakti Party (LJP) president Chirag Paswan, in an open letter to the party workers on Sunday from New Delhi, said: "Papa is sick and is in ICU. I can not leave him." Chirag said the senior Paswan had been ignoring his health problems and went to the hospital on August 28 on on his advice.

According to the letter, Ram Vilas has been under treatment in the hospital for the last three weeks. "I am in the hospital, watching papa fighting against the disease. I also get disturbed to see him on the hospital bed. Papa told me to go to Patna and meet the workers, but I cannot leave him alone in ICU," he wrote in the emotional note.

Meanwhile, Chirag clarified that there had been no talks on seat sharing with any leader or party so far. He said the 2015 alliance between JDU and RJD was different and the seven-point programme started by Nitish Kumar was the decision of JDU-RJD alliance government, not of NDA. The seven resolves of Nitish Kumar are product of his alliance with Lalu Prasad, Chirag mentioned and said the LJP workers would work on its independent agenda of Bihar first, Bihari first.

He directed party workers to go to their constitutencies and work for the LJP candidates in his absence.

Chirag reiterated he had told the members of the parliamentary board of the party last week that till now, there was no negotiation with NDA partners, BJP and JDU, on seat sharing. Last week, Ram Vilas had issued a statement from the hospital bed declaring he was strongly with the decisions of his son and all statements of Chirag had his full support.