Banks may get nod to use gold deposits for meeting CRR, SLR 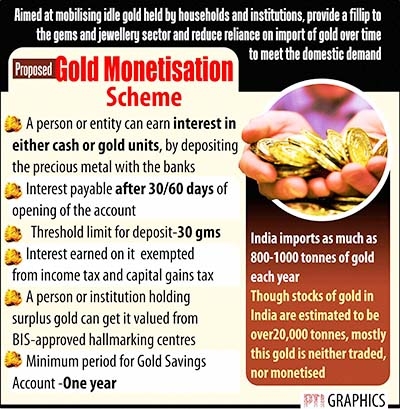 New Delhi : The government is considering allowing banks to utilise gold mobilised under the monetisation scheme for meeting mandatory liquidity requirements set by the Reserve Bank.

“To incentivise banks, it is proposed that they may be permitted to deposit the mobilised gold as part of their CRR/SLR requirements with RBI. This aspect is still under examination,” a draft guidelines on Gold Monetisation Scheme said. The Cash Reserve Ratio (CRR) is the portion of the total deposits, which has to be kept with RBI in cash, while Statutory Liquidity Ratio (SLR) is the portion of deposit compulsorily parked in government securities.

CRR is 4 per cent while SLR is 21.5 per cent. So, 25.5 per cent of the cash deposit mobilised by banks are locked in these two statutory ratios. So, if mobilised gold is considered for meeting the CRR and SLR requirements, then banks would have additional cash for lending purposes.

If gold mobilised through scheme is allowed to meet CRR/SLR needs, the value of the metal will be considered as deposits for meeting the reserve ratios.

The government issued a draft scheme under which a person or entity can earn interest by depositing the yellow metal with banks.

As per the draft guidelines, minimum gold deposit is proposed at 30 gms and the interest earned on it would be exempt from income tax as well as capital gains tax.

A person or institution holding surplus gold can get it valued from BIS-approved hallmarking centres, open a Gold Savings Account in banks for a minimum period of one year and earn interest in either cash or gold units, the draft said.