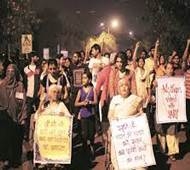 New Delhi: Four video clippings related to the controversial February 9 event at JNU which were sent to the Forensic Science Laboratory in Gandhinagar for examination have emerged as “genuine”.

However, report is awaited on another set of video clips, including the one broadcast by a few news channels and alleged to be doctored. The clips were sent to the CBI’s Central Forensic Science Laboratory here.

“We have received a report on four video clips from the Gandhinagar laboratory and they have been mentioned as genuine. Report on the other clips, being examined at the CFSL, is awaited,” Special Commissioner of Police (Special Cell) Arvind Deep said today.

These video clips, apart from the one recorded by the camera of a Hindi news channel, were mostly shot by mobile phones of security guards and other students who were present at the campus during the February 9 event in which “anti-Indian” slogans were allegedly raised.

The central laboratory here is also examining the concerned news channel’s camera, storage card and wire among other equipment. Their report is expected to arrive in a week, Deep added.

An official privy to the probe said several persons, who allegedly raised anti-India slogans during the event, have been identified on the basis of the videos reported to be genuine.

Earlier, a Delhi government-ordered forensic probe into a set of video clippings of the controversial JNU event had found two of them to be “manipulated”, where voices of persons not present in the clips were added.

A set of seven clips were sent by the Delhi government to the Hyderabad-based Truth Labs, which had found two clips to be manipulated and the others to be genuine.

On February 9, an event was organised in the JNU campus to protest against the hanging of Parliament attack convict Afzal Guru. During the event anti-Indian slogans were allegedly raised, which led to the registration of a police case under charges of sedition and criminal conspiracy.

Later, JNU Students’ Union president Kanhaiya Kumar and two other students, Umar Khalid and Anirban Bhattacharya, were arrested in connection with the case. They are presently out on bail.