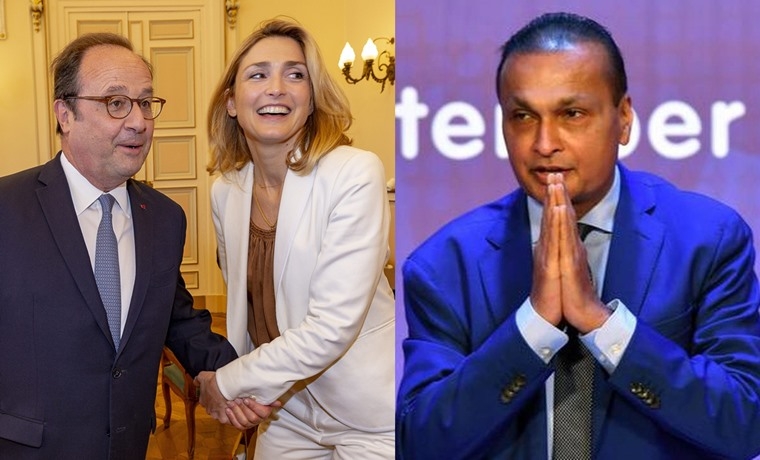 In historic moments for the Indian Air Force, the first batch of five Rafale combat jets entered the Indian air space on its way to Ambala airbase from France.

Amid all the hullaballoo around this new venture, we look back at the filmiest angle that took over this deal a couple of years ago.

In 2018, a French publication 'Mediapart' quoted former French president Francois Hollande as saying that the Indian government proposed Reliance Defence as the partner for French aerospace giant in the Rs 58,000 crore Rafale deal and France did not have a choice.

The Dassault Aviation has chosen Reliance Defence Ltd (RDL) as the Indian partner to fulfil offset obligations of the deal and both companies have already announced setting up of a joint venture to manufacture aerospace components.

Following the statement, central government asserted that it did not have any role in the selection of Anil Ambani’s Reliance Defence as partner by Dassault Aviation for the Rafale deal after it came under attack over former French president Francois Hollande's reported remarks that Paris was given "no choice" on the Indian associate for the mega contract.

The defence ministry said "unnecessary controversies" are being sought to be created following media reports regarding a statement purportedly made by Hollande concerning the selection of Reliance Defence as the offset partner by Dassault, the manufacturers of Rafale aircraft.

"The government has stated earlier and again reiterates that it had no role in the selection of Reliance Defence as the Offset partner," the ministry said.

The opposition parties accused the NDA government of favouring the RDL over state-run aerospace behemoth Hindustan Aeronautics Ltd. The government maintained that it has no role in selection of RDL by Dassault Aviation.

"The reported statement perhaps needs to be seen in its full context - where the French media has raised issues of conflict of interest involving persons close to the former President. His subsequent statements are also relevant in this regard," the ministry said, seen as a reference to a recent media report linking the Rafale deal with a film by Hollande's partner and actress-producer Julie Gayet.

The report had said Ambani's Reliance Entertainment had signed an agreement with Gayet to produce a film before the Rafale deal was sealed. Hollande, who was France's president when procurement of 36 Rafale jets was announced in April 2015, rejected the report.

Five Rafales but seven planes - which are the other two fighter planes escorting IAF's new pride?

The Affair with Julie Gayet

In 2014, the Closer magazine published a report that Hollande was having an affair with actress Julie Gayet. It published pictures of the president wearing a helmet arriving via scooter to visit the actress at night.

Following the controversy, Hollande split with his longstanding partner Valerie Trierweiler. Trierweiler was not married to Hollande but assumed the role of First Lady at official functions after Hollande's election in 2012.

Gayet had first been introduced to Hollande in 2011 by his former partner Segolene Royal, a senior member of his Socialist party and a 2007 presidential candidate. Hollande has four children with Royal, who announced their separation just after she lost the 2007 election to Nicolas Sarkozy.

Reliance Entertainment, which has financed over 50 international films, said it had "participated, through one of its partners, a French financing firm, Visvires Capital, in the film project involving famous French actor and director Serge Hazanavicius, and leading French actor Kev Adams".

"Reliance Entertainment has financed just 15 per cent of the overall film budget, and paid only 1.48 million euros. The balance cost of the film budget has been financed to the extent of another 15 per cent (on identical terms as Reliance) by a leading French investment firm, NJJ Capital, and the balance through sale of TV rights and pre-sales of global territories to a number of parties, tax credits, etc," the statement said.

The 1.48 million euros was "paid to Visvires Capital on December 5, 2017, as customary only about two weeks before the release of the film on December 20, 2017. President Hollande had ceased to hold office in May 2017 more than 6 months prior to the said payment", the statement said.

It said the company also received "300,000 euros from the French producer of the film for providing physical production services for extensive location shooting of the film in difficult mountainous terrain in Ladakh".

"It is deeply shocking that, to serve narrow political interests, baseless allegations have been made by deliberately distorting facts and falsely attempting to co-relate a normal business course payment of a relatively small amount of 1.48 million euros to the supply of 36 fighter jets from France to India valued at nearly 8 billion euros," the statement added.

The Rafale jets are India's first major acquisition of fighter planes in over two decades, and they are expected to significantly boost the Indian Air Force's combat capabilities. 'Indians reacting like a rich son-in-law is coming': Netizens rejoice as Rafale finally lands in...