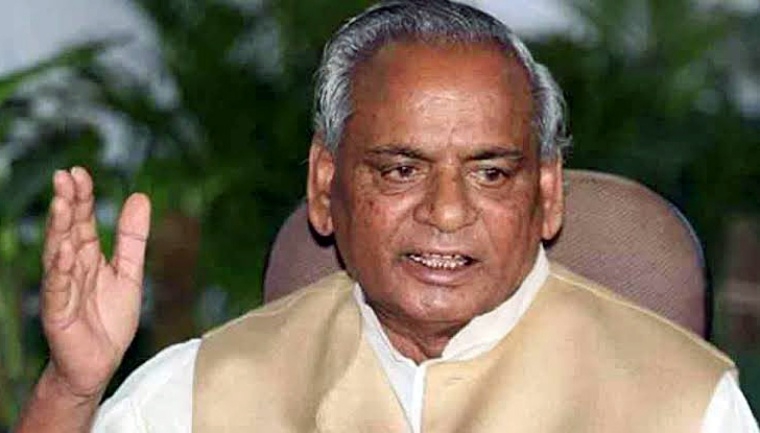 CM Yogi added, "his last rites will be performed on the bank of Ganga in Narora in the evening of on August 23. There will be a public holiday on August 23."

Further he said that his mortal remains will be first taken to his residence, then to state Assembly and BJP office in Lucknow tomorrow for people to pay their last respects to him. "His body will be taken to Aligarh tomorrow evening and then to Atrauli on Aug 23," the CM added. Kalyan Singh, who was ailing for some time, breathed his last on Saturday night, the Sanjay Gandhi Post Graduate Institute of Medical Sciences (SGPGI) said in a statement here. He was 89.

Singh was admitted to SGPGI on July 4 in the Intensive Care Unit in critical condition.

He died due to sepsis and multi-organ failure, the hospital said in the statement. Three-day state mourning will be declared to condole the demise of Kalyan Singh. His last rites will be performed on the bank of Ganga in Narora in the evening of on August 23. There will be a public holiday on August 23: CM Yogi Adityanath in Lucknow https://t.co/LXfiBuezCH pic.twitter.com/WFeqX6nzVh

Singh was the UP chief minister when the Babri mosque was demolished by a mob in Ayodhya on December 6, 1992.

He later also served as the governor of Rajasthan.

Prime Minister Narendra Modi expressed condolences on the demise and wrote on Twitter, "I am saddened beyond words. Kalyan Singh Ji...statesman, veteran administrator, grassroots level leader and great human. He leaves behind an indelible contribution towards the development of Uttar Pradesh. Spoke to his son Shri Rajveer Singh and expressed condolences. Om Shanti." "Generations to come will remain forever grateful to Kalyan Singh Ji for his contributions towards India's cultural regeneration. He was firmly rooted in Indian values and took pride in our centuries old traditions," PM Modi further tweeted.

Praising the life of former Uttar Pradesh Chief Minister, the Prime Minister further wrote, "Kalyan Singh Ji gave voice to crores of people belonging to the marginalised sections of society. He made numerous efforts towards the empowerment of farmers, youngsters and women." 'Saddened beyond words': PM Modi after former UP CM Kalyan Singh passes away, says 'generations will...