A large network of friends may help take your pain away 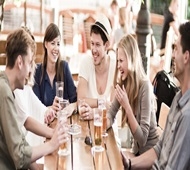 London: People with more friends are likely to have higher pain tolerance, says a research suggesting that the quantity and quality of our social relationships affect our physical and mental health and may even be a factor determining how long we live. Experts looked into endorphins — a chemical in the brain and the human body’s natural painkillers that also give us feelings of pleasure. The researchers hypothesised that endorphins have a powerful pain-killing effect — stronger even than morphine — and used pain tolerance as a way to assess the brain’s endorphin activity.

Friendships boost endorphins in the body and these are well known for acting as our body’s natural painkillers. “One theory, known as ‘the brain opioid theory of social attachment’, is that social interactions trigger positive emotions when endorphin binds to opioid receptors in the brain,” said Katerina Johnson, doctoral student at the Oxford University in Britain. “This gives us that feel-good factor that we get from seeing our friends,” she added in the paper published in the journal Scientific Reports.

The results showed that both fit people and those with higher reported stress levels tended to have smaller social networks.”Individuals that spend more time exercising have less time to see their friends. However, since both physical and social activities promote endorphin release, perhaps some people use exercise as an alternative means to get their ‘endorphin rush’ rather than socialising,” Johnson noted. The findings relating to stress may indicate that larger social networks help people to manage stress better, or it may be that stress or its causes mean people have less time for social activity, shrinking their network.

“These results are also interesting because recent research suggests that the endorphin system may be disrupted in psychological disorders such as depression. This may be part of the reason why depressed people often suffer from a lack of pleasure and become socially withdrawn,” Johnson said.”As a species, we’ve evolved to thrive in a rich social environment but in this digital era, deficiencies in our social interactions may be one of the overlooked factors contributing to the declining health of our modern society,” Johnson concluded.